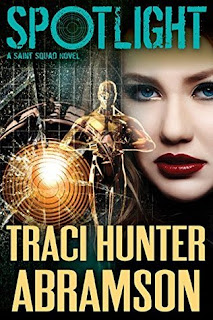 Navy SEAL Craig Simmons has pledged his life to serve and protect, so when this newest member of the Saint Squad observes a stunning young woman on the beach being shadowed by an armed man, he leaps into action. It doesn’t take long to realize his mistake, but it also puts him in a position to meet a very well-known actress, Sienna Blake. For Sienna, the timing couldn’t be more perfect—she’s preparing for a role as a CIA agent, and who better to help her prepare than a Navy SEAL? Craig and Sienna develop a lighthearted friendship, though both are aware of their growing attraction. Neither realizes, however, that a treacherous enemy is setting in motion a terrifying plan to destroy Sienna . . . A series of near-fatal accidents on set are too close for comfort, and Sienna has been lucky to escape with her life—so far. Despite the rising danger behind the scenes, the show must go on. When the Saint Squad is enlisted by the FBI to safeguard Sienna on the ill-fated film set, Craig is driven to protect the woman he is quickly growing to love. As the list of suspects and motives grows, Craig and the Saint Squad will do whatever it takes to track down the perpetrator—before things turn deadly.

I was so, so excited to read this book!  I love the Saint Squad series and I love Traci Abramson's books.  Happy is the day a new book comes out for me to delve into.

Craig is the newest member of the Navy Seal team dubbed the "Saint Squad".  He is still trying to find his place among this tight knit group of men.  Craig is a defender.  He takes his jobs seriously and he is dedicated.  He just oozes all strong man, all the time.

Sienna and Craig meet when Craig thinks he is saving her from a stalker guy on the beach.  Oops, wasn't a stalker, but Sienna is impressed with Craig and asks for his help with her upcoming movie.  I enjoyed the growing relationship between Craig and Sienna.  It had a natural flow to it even though the circumstances were anything but normal.

This book is a romantic suspense.  It's not heavy on the suspense so even a "won't read scary" girl like me can read and enjoy it thoroughly.

Content:  Clean!  No swearing or sexual content.  LDS fiction- some religious elements mentioned as the characters are LDS but nothing preachy.

Posted by Getting Your Read On at 6:00 AM