A Class of Her Own: A School Teacher Romance (The Thornback Society Book 2) by Aspen Hadley 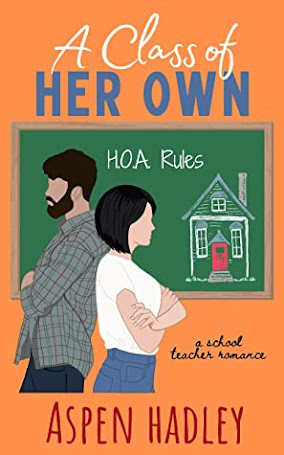 Meredith Atwood has been described as a lot of things.
Her friends call her determined, strong, and dedicated. Her enemies, well, their words are a little less flattering. But, Meredith doesn’t have time to worry about appearances, especially not when she finds herself locked in a life or death battle with her new HOA president – a man, incidentally, who didn’t even want the job that should have been hers.

Brooks VanOrman doesn’t have a lot of time or interest in fighting battles. However, when he finds himself unwittingly in the position of HOA president, he realizes he’s going to have to start caring, and soon. To complicate matters, his neighbor - the feisty, dark-haired woman of his nightmares - refuses to follow the rules and he’s the one called in to enforce them.

It’s an instant clash of wills.

Only the more Brooks gets to know Meredith, the more he realizes that there’s a lot more to the fierce warrior than meets the eye.

A Class of Her Own is a closed-door, kissing only, sweet and clean romance with all the swoon but no explicit content.

I know Aspen Hadley isn't a new author but I think this is the first time I've reviewed one of her books on my blog.  I happened to be sitting at a table with her at an event and we got to talking.  She is a lovely person.  Lots of fun.  Of course I went to check out her books!  I have a few unread ones on my kindle but decided to start with the newest series, The Thornback Society.  I read the first book, Class Act (which is on KU) in preparation for reading and reviewing this book.  I do think these books should be read in order just for reading enjoyment.  There is a continuation of storylines for the characters.

Meredith is a prickly character until you get to know and understand her better.  Isn't that always how it is, though?  I enjoyed her emotional journey of awareness and breaking down barriers.  It was super satisfying.  I liked that her friends called her out on some of her poor verbal choices but always followed up with understanding and love.

Speaking of the friends, they take up a large portion of this book.  I would say at least half of the book is spent with them.  This puts the romance as a backstory until at least half way through.  Then it starts moving.  Personally, I would prefer to see more of the romantic relationship and the friendships as more of a secondary story but that's just me.

Brooks might be the most patient, understanding man ever.  He is so aware.  So intuitive.  A unicorn among men, as Meredith realizes too.  I loved the scene where Brooks is vacuuming and Meredith is having a moment of complete attraction.  She panics and calls her friend.  It's hilarious.  And true.  I wouldn't have thought that 20 years ago, but now?  Vacuuming is totally sexy.

When you read this book, don't forget to read the author's notes at the back.  You won't believe how much of this story comes from the author's personal experiences.  It's crazy and so fun.

I'm really enjoying this sisterhood of friends and these sweet romances.  Author Aspen Hadley is definitely someone I'll be keeping my eye on from now on.