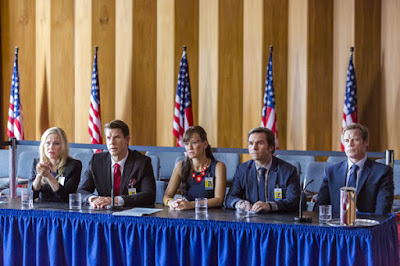 Williamson said, “’Signed, Sealed, Delivered: The Impossible Dream’ is an unusual balance between light and dark, comedy and drama. Our lead character Oliver said it best, ’The world is a terribly complicated place, and so much of it can be ugly. That’s why what is gentle and beautiful and joyful is worth fighting to preserve. And it’s why we honor those who fight.’ She added, “That’s why we made this movie, and we are grateful for the opportunity to share it.”

“Signed, Sealed, Delivered” is a comedic drama that follows the lives of postal workers who transform themselves into an untraditional team of detectives to track down intended recipients of undeliverable mail. Their missions take them out of the office into an unpredictable world where redirected letters and packages can save lives, solve crimes, reunite old loves and change futures by arriving late but somehow on time.

I guess this is movie sharing weekend for me.  Yesterday I posted about an awesome movie, The Cokeville Miracle and today I get to tell you about another movie that I loved watching.  Signed, Sealed, Delivered:  The Impossible Dream picks up right where the last movie ended.  I love the continuation of the story and it's characters.

I love my country.  I love the freedoms that were established for us long ago.  I'm SO grateful for the many men and women who give so much for our country and for me and my family.  It takes special people to serve in our armed forces.  I give them my respect and again, my gratitude.  I do not take for granted the freedoms that I enjoy.

This movie pays a special tribute to those who serve our country.  I will admit that I cried.  I was touched and moved by this story.  I loved it.  I have loved every TV show and every movie associated with this series but I think this one was my favorite so far.  LOVE.

It airs tomorrow!  Don't miss it!

Hallmark Movies & Mysteries Channel Locator: http://www.hallmarkmoviesandmysteries.com/channel-locator
Posted by Getting Your Read On at 4:00 AM