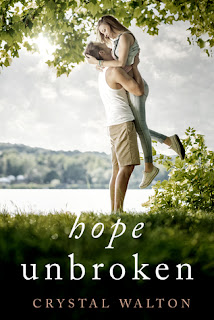 Accustomed to loss, twenty-two-year-old Emma Matthews learned long ago how to shield her heart from hope. But she never expected it to be the only thing she has left.

A two-thousand-mile flight to Nashville should’ve been enough time for Emma to sort out her future with Riley. Then again, when has time ever played fair? With a contract ultimatum jeopardizing Riley’s career and a ruthless vendetta sabotaging Emma’s efforts to save the Portland center, the fires they spent the last four months facing are far from over.

As danger strikes, rifts emerge, and delays snowball, the unrelenting war between the past and future tests Emma’s convictions until she has no choice but to put her faith in the one thing she’s always doubted.

Will time once again steal the dreams she’s fought so hard to believe in, or will it finally teach her how to trust in a hope that remains unbroken?

This is the final book in this Unveiled series and I'm very, very happy to be at a conclusion and resolution for Emma and Riley.  The road to happiness has been long and hard for them both as they've grown, made choices, and fought to stay together.

In this book, even more real life problems face Emma and Riley.  I liked the feel of this book as Emma and Riley face more of the difficulties together instead of apart.  They became a better support to each other.   Riley has finally reached his limits with being far away.  He finally put his foot down and headed back to Emma so they could be there for each other.  I liked his determination to figure things out while together instead of apart.  Their relationship was the most important thing to him.  That is what changed the tides of the book for me.  That was the moment that Riley became a grown up to me.  He wasn't sacrificing his music career, he was just finding a way to make it work within his relationship with Emma.

I have enjoyed this series and the journey of Emma and Riley from the first meeting, through the bumps of their relationship and now to the end here, which is really just the beginning.  It's been a good ride, filled with emotion and real life drama.  I love that this series is clean- no swearing or sexual content beyond kissing.  It is now time to say goodbye to Emma and Riley but I do so with satisfaction and contentment.  :)