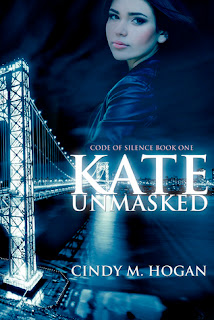 The mysteries of her past consume her.

Seventeen-year-old Kate has never stopped searching for the secrets of her past - the secrets that began with her missing birth parents. After years of every lead drying up and every hope turning false, Kate finally lucks onto a promising lead.

Determined to find the truth once and for all, Kate travels to the gritty New Jersey shore. But what she finds is worse than she ever could have imagined. She can't hide from who she is, and now she must face the awful consequences of finding the very people she should have been hiding from.

Some secrets should stay dead and buried.

I'm coming in with a mixed sort of review on this one.  I'm a fan of Cindy Hogan's Christy Series and because of that I had high hopes for this book and the beginning of this new series.  I didn't love it like I wanted to but there were parts I definitely enjoyed.

The main character, Kate, has me so conflicted.  For the most part, I just didn't like her and I liked her best friend even less.  There were some redeeming moments for Kate but overall, I just felt like her character was inconsistent.  One moment she is whining and annoying and the next she is brilliant.  Kate is a teenager though and I've had a few of those, so I know the attitude swing that is possible with teenagers but for some reason I just had a hard time liking Kate.

Duran, on the other hand, was completely likable from the very first moment.  He is the character that kept me feeling hopeful and not crazy like I want to strangle you.

The first half of the book just sort of eeked along.  It felt slow and there was just way too much teenage drama and whining.  It got old.  The last part of the book, things picked up and I was more into the story and what was happening.  There were so many things that as I reader, I just didn't buy into.  I didn't believe it.  Most of it in regards to Kate.

Maybe this is written with the younger teenagers in mind?  I don't know but I'm still debating whether or not to follow this series.  Maybe I'll just stick to the Christy series which I really do love.  I'm reading the next book in that series right now and I'm really loving it.  Look for my review of that one next week!