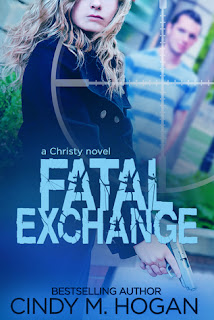 For 19-year-old Christy Hadden, it’s life as usual as a spy, only this time in Paris, France. Her mission: retrieve a flash drive containing evidence that a high public official is working to destroy Paris. Pretty standard, until someone steals the drive from her. Forced to abandon her position protecting the informant, she goes after the thief, but returns empty handed—only to find her informant dead.

Christy's failure taints her reputation at Division and the director has lost all faith in her. But Christy isn't one to slink into the shadows. Alone and disgraced, she decides to track down the drive and solve the murder, not only to redeem herself as a spy, but to give meaning to her informant’s sacrifice, and perhaps even save Paris.

Suspenseful, with the right amount of romance, and awash with action, Fatal Exchange will send you on a thrill ride that will be hard to forget.

This book had so many elements that I just love.  I was really looking forward to reading this book and it definitely did not disappoint.

Fatal Exchange is the third book in this Christy series.  Christy is a spy and a good one at that.  I love her spy team because they are so fiercely loyal to each other.  They are friends and they look out for each other one hundred percent.

The pacing of this book is fantastic.  It was fast and I felt like I was on a fantastic ride where I hold on for dear life with a smile on my face the whole time.  There is danger and suspense almost around every turn.  It was great fun.

There is some light romance, but it isn't a main focal point in the book until toward the end.  I think this book probably could stand alone, but I would recommend reading the whole series because that is really how you get to know the characters.  I'm sure this book wouldn't have been so good to me if I hadn't been following the series and had that connection to the characters with the background of knowledge that comes with it.

This is, by far, my favorite series from Cindy Hogan.  She has found her groove with these books and I am a fan.