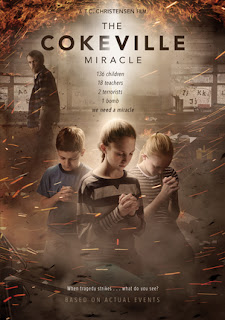 On May 16, 1986, in the small, ranching community of Cokeville, Wyoming, David and Doris Young took an elementary school hostage for several hours before detonating a bomb inside a classroom that held every teacher and student in the school. In the wake of the madness, Ron Hartley, whose children were inside the classroom, must fight his skepticism and unbelief as he hears eyewitness accounts from the students about miraculous, heavenly intervention during the crisis. When tragedy strikes ... what do you see?

Have any of you seen this movie?  I just watched it and I don't know how anyone could end this movie and not believe that God is real and miracles exist.

This movie is based on actual events that occurred in Cokeville, Wyoming 1986.  I wasn't familiar with this story before hearing about the movie coming out.  I was a young teenager in 1986 and not paying attention to the world around me much past how it effected me directly.  But this story deserves to be heard.  It is a movie that speaks of tragedy and triumph.  It is based on faith in God and the miracles that surrounded a school full of children when a terrorist took over.

As I watched this movie, I was filled with all kinds of emotions.  As a parent, one of my worst nightmares is to have something like this happen to one of my children.  I can't even imagine how scary this day must have been for all involved.  I was touched by the efforts of the teachers who were willing to sacrifice themselves to save those children and did whatever they could that day to protect them.  My heart was full of gratitude for the miracles that the people of Cokeville received that day.

It's hard to understand why some people get miracles like this and some do not.  There are so many instances of terror in schools that do not end this way.  It breaks my heart.  But while I do not know why miracles happen for some and not for others, I do know that when miracles happen, we should celebrate and acknowledge them as such.

I didn't know this until this movie was coming out, but there is a family in my neighborhood that was involved in this.  They had two children in this school on this day.  That really brought this story closer to home for me.  It's been great to hear about their support for this movie.

This was such a good movie.  It enlightened me, it made me feel.  I ended the movie feeling so emotional but also so grateful.

Content:  I would not let my young teenage daughter watch this.  She is very sensitive to things like this and because I know her, I know it would scare her for sure.  It is rated PG-13 for a good reason.  While there isn't anything overly graphic, the scenes are portrayed very realistically and may frighten children.
Posted by Getting Your Read On at 6:55 AM

Labels: based on actual events, movie