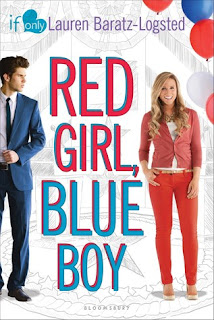 Enjoy Red Girl, Blue Boy and the other standalone titles in Bloomsbury’s contemporary If Only romance line centered around an impossible problem: you always want what you can’t have!

Sixteen-year-old Katie and Drew really shouldn’t get along. After all, her father is the Republican nominee for President of the United States while his mother is at the top of the Democratic ticket. But when Katie and Drew are thrown together in a joint interview on a morning talk show, they can’t ignore the chemistry between them. With an entire nation tuned into and taking sides in your parents’ fight, and the knowledge that—ultimately—someone has to lose, how can you fall in love with the one person you’re supposed to hate?

This title in the If Only line is a frank and funny romance that shows how sparks fly when opposites attract.

This book is set up perfectly to come out in the middle of a very political year for the U.S..  It's so easy to imagine this book actually happening right now.

Katie is red.  Republican all the way and in full support of her father's run for president of the United States.  Drew is the son of the Democratic nominee for president.  And while he isn't into politics like Katie is, he still finds himself in the middle of all kinds of media attention.

These characters felt really young to me.  Maybe even younger than the 16 years they were supposed to be.  Katie is socially awkward and a bit naive when it comes to making friends and talking to boys but she is also endearing.  Katie and Drew form a new kind of friendship that takes some navigation because they are on opposing sides of a very big election.

I liked that Katie and Drew developed more of a friendship than a romantic connection.  It seemed very appropriate for two sixteen year olds.  Even when the storm of misunderstanding came, it still felt very on point for the age.

This was a sweet story of a boy and a girl and first love.

Content:  some kissing
Posted by Getting Your Read On at 4:00 AM