A Guarded Heart by Heidi Kimball + $25 and Book Giveaway! 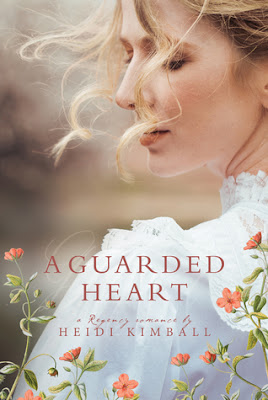 Three years after a shocking scandal destroyed her family and forced her into isolation, Eleanor Hayward finally has an opportunity to put her painful history and dashed hopes behind her. But reentering society is no simple task. In her cousin's glittering ballroom, Eleanor is stunned when she comes face-to-face with the man who broke her heart those years before.

Edmund Fletcher thought he had laid the past to rest until he unexpectedly encounters the woman who so nearly became his wife. Soon to be engaged to another, Edmund knows he must let go of the complicated feelings he harbors for Eleanor. However, when the Hayward scandal resurfaces and the truth behind their parting is revealed, Eleanor and Edmund are left reeling. Tormented by thoughts of what could have been, they realize it is impossible to rewrite history. But is there a future in which they might both find happiness—and true love?

What a beautifully written story with engaging, endearing characters.  My heart was so sad so often for Eleanor.  Her story is just, for lack of a better word, sad.  And yet, her heart is gentle, soft and kind.  I cannot even tell you how desperately I wanted good things to happen for Eleanor.  I was so invested in her.

This book is told from alternating views belonging to Eleanor and Edmund.  It also switches back and forth in time so we gradually get the backstory that led Eleanor and Edmund to the place they are now.  I was grateful for those flashback moments because they were the light and hope to an otherwise sad tale.  It gave me a better understanding and view of both Edmund and Eleanor, who are both fantastic characters.  There is also a great cast of secondary characters.

I really loved this story.  It captured my heart and my emotions.