Heart of Red, Blood of Blue by Rebecca Belliston 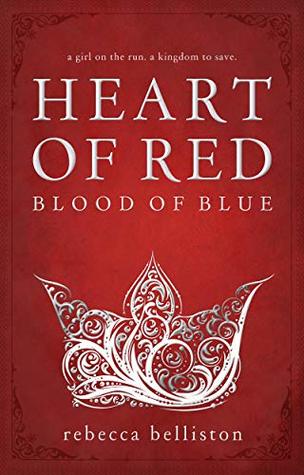 A girl on the run. A kingdom to save.Princess Gisela of Steinland was born without color. Albino. To add to this curse, her betrothal to Prince Jerrik of Kronga ends in his death and starts a ten-year war her father is determined to win, even if it means bringing her out of hiding to do it. Now the savage Krongon war commander, Bloodless Kristoff, seeks the hearts of the entire royal family, especially Gisela's.

Desperate, her father agrees to another alliance that involves her marrying an old brute of a king. Unwilling to be the sacrificial lamb, Gisela goes on the run. Thrown into the center of a battle between three kingdoms, she finds herself fighting for her life and the right to be truly loved.

Can the girl who started the war find a way to end it?

Wow.  What a story!  It takes you on great journeys through neighboring lands who are all at war so the danger is everywhere.  There is an intensity bubbling from the very beginning of the story and it just keeps growing in strength throughout the whole book.  Since this book is so long, by the end of the book I felt half crazed with desperation!  Those intense moments just keep coming until the very, very end.

Gisela had an excellent growing arc.  She did a lot of growing up throughout the book.  She made mistakes, but she learned from them.  She also learned how to stand up for herself and became stronger and stronger as the story went on.  I love a strong female lead.  The author did a great job of making Gisela strong but never losing those inherent female qualities of compassion and empathy.  A female can be strong but soft too.  Gisela was a great representation of both of these things.

There were so many players in this game but the author also did a great job in this regard.  I never felt overwhelmed or confused as to all the characters and who they were.  The plot was always moving forward.  I actually think this book would make such a great TV mini series or a movie series!  I could visualize everything just like a movie.  I really love when that happens.

Don't miss this great story of adventure, intrigue and even love.

- I bought a copy of this book.  All opinions expressed are my own.

Posted by Getting Your Read On at 9:48 AM