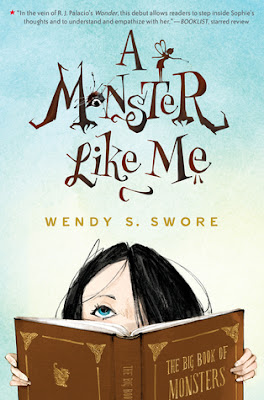 There are trolls, goblins, and witches. Which kind of monster is Sophie?Sophie is a monster expert. Thanks to her Big Book of Monstersand her vivid imagination, Sophie can identify the monsters in her school and neighborhood. Clearly, the bullies are trolls and goblins. Her nice neighbor must be a good witch, and Sophie’s new best friend is obviously a fairy. But what about Sophie? She’s convinced she is definitely a monster because of the “monster mark” on her face. At least that’s what she calls it. The doctors call it a blood tumor. Sophie tries to hide it but it covers almost half her face. And if she’s a monster on the outside, then she must be a monster on the inside, too.

Being the new kid at school is hard. Being called a monster is even harder. Sophie knows that it’s only a matter of time before the other kids, the doctors, and even her mom figure it out. And then her mom will probably leave — just like her dad did.

Because who would want to live with a real monster?

Inspired by real events in the author’s life, A Monster Like Me teaches the importance of believing in oneself, accepting change, and the power of friendship.

This is a very cute book and one I think would be perfect for reading aloud to children.  It has humor and creativity that will entertain both young and old while also bringing out the tender topics of bullying and how to treat those who may look or act different than us.  This had a similar message and feel as the book, Wonder.

Books like this always strike a deep chord within me as my daughter also has a malformation in her face/neck area that was quite obvious when she was younger.  It was so hard to be out in public where people were cruel- sometimes without really meaning to be, but thoughtless words hurt.  I've cried many tears over the years for my beautiful daughter who has suffered through looking different and feeling different.  Much like the author's parents, (see author's note below) we took a proactive role and tried to talk with my daughter's school classes each year to explain her condition and help kids understand.  It helped a bit because when someone stands in front of you, vulnerable, pleading for kindness by giving information with emotion usually people listen.

That's why books like this matter because it's a great way to open avenues of conversation with children about kindness and acceptance.  Kids need to learn compassion.  Adults too.  This book also helps kids see that what you look like on the outside isn't who you are on the inside.  Greatness comes from within.  Beauty comes from within. 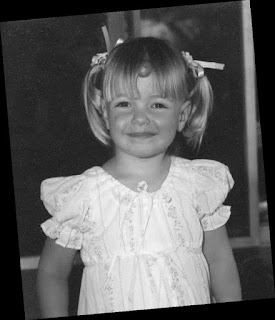 Sophie’s story is dear to my heart because I know how it feels to be bullied because I looked different from everyone else. When I was a child, I had a hemangioma on my forehead that stuck out so far my bangs couldn’t cover it, no matter how hard my mother tried. Because the tumor was made up of blood vessels, I could feel my heart beating inside it when I was playing hard or really upset.

The incident at the grocery store where the hydra lady says,“Hey, look kids! That girl doesn’t need a Halloween costume. She’s already got one!” is an exact quote of what a woman once said to my mother and me. Another woman told a classroom full of kids that I had the mark of the devil. Kids asked if it was a goose bump, or hamburger, or if my brains had leaked out. My dad had to chase away some bullies who had followed me home, called me names, and pushed me into the street. Sometimes, after a bad day of bullying, I wished I could just rip the mark off my face and be like everyone else—but it was a part of me, and wishing didn’t change that.

My parents decided to take an active role in educating the people around me so they would know what a hemangioma was and understand that it wasn’t icky, or gross, or contagious. Whenever we moved to a new place, my dad would go with me to the elementary school and talk to the kids about my mark and let them ask questions. After those talks, kids befriended me and noticed when bullies came around. Like Autumn, my school friends would speak up when they saw someone being mean to me, and sometimes they would stand between me and the bullies until they left me alone. I didn’t let the bullies stop me from doing what I wanted to do. I climbed trees, went swimming, wrote poetry, brought my tarantula and snakes to show-and-tell, and played in the tide pools.

This is my message to anyone who experiences bullying: Don’t let the bullies define you! I’ve been there, I know it hurts to be teased, but don’t let it stop you from doing what you want. Find something you enjoy—a hobby, talent, or challenge—and practice that skill. Know that someone out there, maybe even someone in your same school, needs a friend as much as you do. Be that friend. Stand up for each other. And know that you are not alone.

You can always find me at WendySwore.com, and I would love to hear your stories and what you thought of the book.
Posted by Getting Your Read On at 8:32 AM

Labels: A Monster Like Me, Middle Grade, Wendy S. Swore