The Reluctant Courtship of Jack Allan by Dayle King Searle 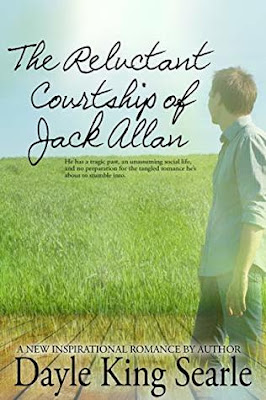 Jack Allan cannot count the number of times he’s been approached with invitations beginning something like, “My sister has a friend…” It seems as if everyone in the small town of Corbett, Idaho, is intent on finding a wife for him--everyone except for Jack himself. The townspeople gossip that this is because Jack, a young widower, has not gotten over the death of his wife, Katelin, and in a way they are right. However, it isn’t his undying love for Katelin which is holding Jack back. Rather it is the memory of events surrounding her death, events about which only he knows and which have left him filled with guilt.

Undeterred, Ruby Henderson, Jack’s feisty neighbor, introduces him to her granddaughter, Ally. Jack unwittingly finds himself attracted to Ally, and it seems she is attracted to him too. So he is stunned when he finally asks her out and she turns him down his by saying it would be best if they were just friends. This sets in motion events which lead Jack into one romantic entanglement after another and with not one possible romantic interest but three.

Set against the backdrop of farming and small town life, The Reluctant Courtship of Jack Allan is filled with amusing characters. It tells a story which is sometimes humorous and sometimes poignant as Jack struggles with his guilt while also working to sort out his love life and those of the people around him.

This book is a bit of a mixed bag for me.  It's labeled as an inspirational romance but I really wouldn't call it that.  I would say that it was inspirational because there is definitely religious tones but this really wasn't a romance.  One of my reviewer friends said this read like women's fiction and honestly, she nailed it.  That is exactly what I thought while reading it.  The funny thing is that the main character is a male.  So, it's women's fiction with a male lead.  Ha!  There is some dating in the book but in all honesty, that takes a back seat to what I would like to call "the life of a small town Idaho potato farmer".  This story is really about Jack; his day to day life, his family and his community.

Even though the romance was actually minimal, I was still, for the most part, interested in Jack's story.  Sometimes it got a little long with details of things (potato harvest) and I really wanted to skim through it and move on but overall, Jack is a likable character and I enjoyed being a part of his world for a bit.  The author did a great job of making Jack, just your average, hard working guy, feel like someone I would like to know.   I was rooting for Jack and his happiness all the way through.

Posted by Getting Your Read On at 9:34 AM