The Sorceress in Training: A Retelling of The Sorcerer's Apprentice (Fairy Tale Kingdoms #3) by Shari L. Tapscott 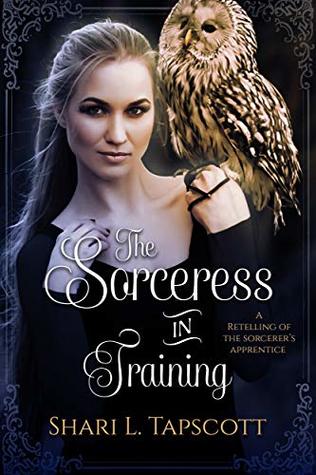 Before Lady Brynn took her first breath, her life's path was already chosen. Born into a family that values tradition, at twenty years of age, Brynn is expected to travel to the College on the Mount and spend the rest of her days immersed in books—learning science, architecture, and mathematics, devoting herself wholly to her studies, forbidden from indulging in frivolities such as literature or poetry. Or love.

A week after Brynn’s fated birthday, everything is going according to plan. But when Brynn's carriage busts an axle on the road to the college, one chance meeting with a mysterious sorcerer could change the course of her life forever. In order to escape duty—to claim her position as the sorcerer’s apprentice and avoid a life of solitude—Brynn must ask for help.

As a guard in Lord Calvin’s employ, Gavin knows his place. He’s sworn to protect Brynn and escort her to her new home. If the thought of abandoning her in the cold stone walls of the college ties a hard knot in his gut, it doesn't matter. And if he's in love with her? That doesn’t matter either.

Despite Gavin’s reservations, when Brynn begs the guard to see her safely to her new position in the sorcerer’s house, he’s helpless to resist. Now they’re running in the night, barreling toward an unknown future.

But soon the pair realizes they’ve made a grave mistake. Because Master Marcus is shrouded in dark secrets, and as his apprentice, Brynn is trapped right in the middle of them…

I am always on the lookout for a new book by Shari Tapscott.  Her books are some of my favorites.  This book is the third book in a series of fairy tale re-tellings.  Characters from previous books are mentioned and one of the main characters from The Queen of Gold and Straw (Rune) makes a prominent appearance in this book as his story continues from the last book.  I was actually so glad to see him.  My heart gave a happy sigh that I would hopefully see a happy ending for him.  Because of the ongoing story of this character, I would recommend reading these books in order.  They are all so good though, you won't be sorry.

Brynn's desire to follow her own path resonates throughout this whole book.  I could really feel her desire to be something of her own choosing and not be subjected to the caged in path her family set before her.  She is somewhat impulsive but constant in her desires.  She wants to be her own woman and she wants Gavin.

Gavin is a tough nut to crack.  He is motivated by duty and social expectations.  Brynn pushes against both of those things naturally and Gavin has such a hard time wrapping his head around that.  But, he has a heart that is bound to Brynn.  It's terribly romantic.

I loved the characters, the dialogue and the adventure of this story.  It had everything I've come to expect and look for in a book by this author.

This series is on Kindle Unlimited!