Waiting for Fitz by Spencer Hyde 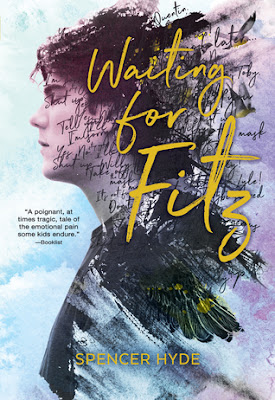 Addie loves nothing more than curling up on the couch with her dog, Duck, and watching The Great British Baking Show with her mom. It’s one of the few things that can help her relax when her OCD kicks into overdrive. She counts everything. All the time. She can’t stop. Rituals and rhythms. It’s exhausting.

When Fitz was diagnosed with schizophrenia, he named the voices in his head after famous country singers. The adolescent psychiatric ward at Seattle Regional Hospital isn’t exactly the ideal place to meet your soul mate, but when Addie meets Fitz, they immediately connect over their shared love of words, appreciate each other’s quick wit, and wish they could both make more sense of their lives.

Fitz is haunted by the voices in his head and often doesn't know what is real. But he feels if he can convince Addie to help him escape the psych ward and everything will be okay. If not, he risks falling into a downward spiral that may keep him in the hospital indefinitely.

Waiting for Fitz is a story about life and love, forgiveness and courage, and what’s necessary to let go and learning what is truly worth waiting for.


I've been sitting here for so long trying to figure out what to say about this book.  I don't think I'm going to figure it out anytime soon because it was all such a mixed bag for me.  There were moments that I was into this story but mostly I felt like a complete outsider looking in.  I do not have first hand experience with either of the two mental illnesses that the main characters have so that was all a bit foreign to me.  I didn't feel that emotional connection to either of the characters because I just didn't "get" them.  They both like to engage in verbal word play which seemed a bit over the top at times.  I mean, who can think like that at all times and for so long?  I don't know.

I did love Addie's easy acceptance of Fitz and all the kids around her.  In the beginning it's all about Addie's obsessive behaviors of washing and counting steps, heartbeats, etc. because she thought someone was going to die if she didn't. But, when she gets to the psychiatric ward, it's mostly just blinking and tapping mentioned.  It wasn't so much about her actual progress to less obsessive/compulsive behaviors as it was talking about "masks" and plays and Fitz.  I was definitely more interested in the story when Addie and Fitz left the hospital in order to accomplish something Fitz was determined to do.

Mental illness in all it's forms is a tough subject to write about, I think.  It varies so much from person to person.  I appreciate the author, his personal struggles and how much of himself he wove into the pages of this book.  I am grateful for people willing to talk about the hard things in life.