The Earl's Betrothal by Karen Tuft + $25 and Book Giveaway! 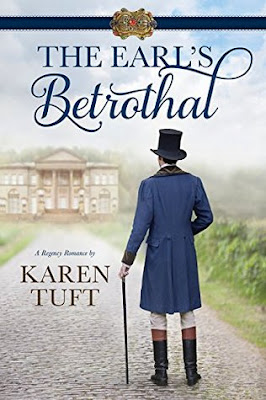 Out of the war and into another, Captain Lord Anthony Hargreaves finds the politics of romance to be as uninviting a battle as the one that nearly cost him his life in Badajoz, Spain.

Wounded both mentally and physically from the Peninsular War in 1812, Anthony returns home to find that his older brother has died, placing Anthony next in line to inherit the estate. But he’s not ready for such responsibilities. And when Anthony’s dying father pleads with him to marry and produce an heir to preserve the family title, it nearly sends Anthony over the edge; nevertheless he dutifully faces a long line of hopeful young ladies who await him. No one grabs his attention, though, like Amelia Clarke, his mother’s stunning companion, who is off-limits for the earl. But when Anthony unwittingly puts Amelia in a compromising situation, he dedicates himself to protecting her reputation.

But the horrors Anthony faced while away from home have left him feeling broken and tormented. And Anthony finds himself drawn to Miss Clarke, the only one who can chase away his demons, but he must overcome the hostility of a society driven by class, a jealous duke bent on revenge, and himself—for could Amelia ever really love a haunted man?

Ooh, I really loved this book.  That's always a good way to start out a review, right?

The characters in this book felt real to me and I really liked them.  They had so many good attributes that it was easy to settle in and enjoy them.

Amelia is kind.  She is at the mercy of others for her welfare and she knows it, yet she conducts herself with dignity and decorum.  She is smart and she knows how to stand up for herself without appearing arrogant or rude.  I love the quiet strength she has.

Even though Anthony is struggling with the awful events of the war he was involved in, he is also a kind person.  He shows respect to others.  He is a very duty conscious person and his desire to protect others is so admirable.

I loved how the characters circled and swirled around each other.  There is chemistry and interest and it all just felt good.  This will be going down as one of my favorite books for this month!

a Rafflecopter giveaway
Posted by Getting Your Read On at 6:51 AM