The McCarran Collection by Liz Adair 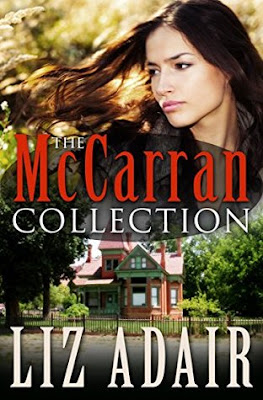 Bridget Olasfson, a beautiful archivist hiding secrets, comes to Utah's brilliant red rock country to catalog the McCarran Collection. Though she's sworn off men in her life, she’s attracted to Ben, the bad-boy, off-road racing McCarran cousin. But it’s Lew McCarran, the tall, quiet cousin, she turns to when she finds herself caught up in a dangerous intrigue involving a lost boy, a drug cartel, and death. What will she do when the only way to save the boy is to give up the man she loves?

Part romance, part cozy mystery, part thriller, The McCarran Collection is, last of all, a novel about family ties.

This book wasn't exactly what I was expecting.  It took me a fair bit to get into the book and invested in it's characters but it did eventually happen.  Honestly, it was the little boy that brought that about.  I loved him.

I love when books are based on a bit of history and this one was.  It is set in Kanab, UT which I have driven through many, many times on our way from AZ to UT.  Beautiful country, that.  The house the characters live in is the part of history.

I felt like the author was trying to incorporate too many genres or separate story lines.  There is the family "secrets" discovered by Bridget in her work as an archivist, drug cartel stuff which was supposed to provide some suspense, and then a murder mystery as well.  I wish the author would have just stuck to one of those and developed the emotions of that genre more.

By the end I was more invested in the book.  I liked the way things came together for a good ending.  But again, it was the little boy who made the story for me.  He brought each scene to life.

I received this book in exchange for my honest review.