On Tour With The Firefighter's Refrain by Loree Lough and GIVEAWAYS! 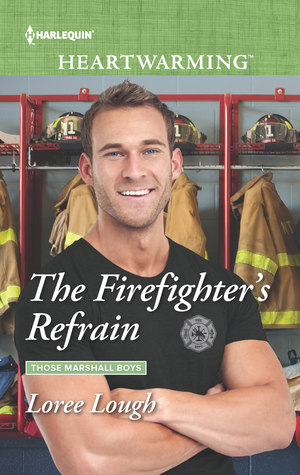 Dreams of stardom took musician and firefighter Sam Marshall far from his Colorado roots. Starting fresh in Nashville hasn't been easy, especially after an injury on the job, but he's working his way to the Grand Ole Opry one open mike at a time, teaching at the fire station to make ends meet. Yet Sam's intentions are shaken when he meets the lovely owner of a local café. Suddenly, Sam's dreams are filled with her. Too bad that as the daughter of country-music wannabes, Finn Leary's been there, done that. She'll never choose a musician. So how can Sam possibly get the girl and keep the guitar?

It's another Harlequin Heartwarming book!  This is a sweet romance, perfect for girls like me who like their books clean.

This is the third book in the Those Marshall Boys series.  You don't have to read the previous books to enjoy this one, but sometimes it fun to read in sequencial order because you get to see characters from previous books as you go and they mean more to you.

I really liked both Sam and Finn but for very different reasons.  Finn is focused and so completely devoted to her sister.  Her life has been hard and Finn has shouldered the responsibility of so many things by herself.  You have to admire that sort of character.  But, because of her past and even her present life, Finn functions like an island.  She doesn't let people in and she doesn't trust easily.  That's why Sam is perfect for Finn.  He is solid, steady and smart.  He is willing to put in the time to earn Finn's trust.  I liked that.

This book was good.  I felt like the plot swirled in the same place at times without a lot of forward movement so for me, it was the characters that made this book shine. 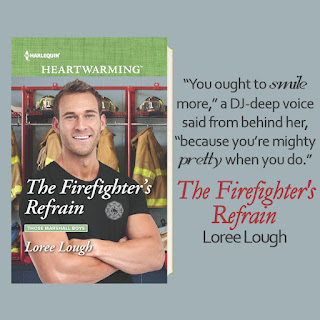 Does she even need a hero?

Summer Lane is no damsel in distress. For the past two years, she's been battling her way back from her worst nightmare, all by herself. So she doesn't need the fabulous former Marine Zach Marshall swooping in to save her.

But she needn't worry. Zach has hung up his shining armor. His instinct to rescue has only brought him heartache, and he's not about to risk it all again--even though everything about Summer makes him yearn to help.

Will she accept his challenge to step up and conquer her fears on her own--even her deepest fears, like trust...and love?

He can say no to everyone but her...

Nate Marshall used to be a yes-man... until being so agreeable cost him dearly. But Eden Quinn has a way of getting him to reconsider his "just say no" policy. Which is how a bunch of troubled teens end up at his ranch for the weekend. Nate can't help but be attracted to the woman who keeps them in line.

This cowboy knows Eden's no damsel in distress, yet hers isn't a one-woman job. If she must do everything on her own, how can he help her... let alone get her to fall for him?

Bestselling author Loree Lough once sang for her supper, performing across the U.S. and Canada. Now and then, she blows the dust from her 6-string to croon a tune or two, but mostly, she writes novels that have earned hundreds of industry and "Readers' Choice" awards, 4- and 5-star reviews, and 7 book-to-movie options. Her 105th book, Sweet Mountain Rancher, #2 in “Those Marshall Boys” series for Harlequin Heartwarming, released in August, 2015. Also new on the Latest Release list, Guardians of the Heart, (#2 “Secrets on Sterling Street historical series from Whitaker House). Next up, Healing of the Heart, #3 in the “Secrets” series…and a brand new 3-book series for Harlequin Heartwarming, releasing between 2016 and 2017. Stay tuned for more in 2016 and beyond!

May 8th: Launch
May 9th: Singing Librarian Books & underneath the covers
May 10th: Christy's Cozy Corners, deal sharing aunt & Hardcover Feedback
May 11th: Katie's Clean Book Collection, Rockin' Book Reviews & Getting Your Read On
May 12th: Becky on Books, I Am A Reader & LibriAmoriMiei
May 13th: Teatime and Books & Thoughts of a Blonde
May 15th: Grand Finale

ONE WINNER will receive a $25 Amazon gift card and The Firefighter's Refrain (signed print if US, ebook if outside US)

ONE WINNER will receive Those Marshall Boys Series, Once a Marine, Sweet Mountain Rancher, and The Firefighter's Refrain (signed print if US, ebook if outside US)

ONE WINNER will receive The Firefighter's Refrain (signed print if US, ebook if outside US)
Ends May 20th 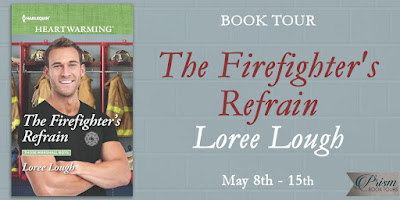