HE CAN SAY NO TO EVERYONE BUT HER...

Nate Marshall used to be a yes-man... until being so agreeable cost him dearly. But Eden Quinn has a way of getting him to reconsider his "just say no" policy. Which is how a bunch of troubled teens end up at his ranch for the weekend. Nate can't help but be attracted to the woman who keeps them in line.

This cowboy knows Eden's no damsel in distress, yet hers isn't a one-woman job. If she must do everything on her own, how can he help her... let alone get her to fall for him?

I am a fan of Harlequin Heartwarming.  Simply put, I know I can read this line of books and not worry about anything popping up that will make me cringe.  I love that I can depend on the Heartwarming line to bring me sweet, clean romances.

I haven't read book one in this series, but I don't think one is dependent on the other.  Individual people, individual stories.

I am a fan of Nate.  In every situation, he is a gentleman.  He is grounded and firm in who he is and what he is about.  Nate is patient and thinks things through before jumping in.  He is at his best when he is needed and he knows this.  Unfortunately, the one person he really wants refuses to need him.

Eden is a frustrating character.  I loved Eden with her boys but I just didn't love Eden with Nate.  Ever.  Her interactions with him always left me frustrated and irritated.  She is so stubborn and mean even.  It's a complete one-eighty from how she is with everyone else.  Her on-off, hot cold attitude got old after awhile.  I wanted Nate to move on and find someone who would appreciate his best qualities.  But, as I said, I did love Eden with her boys.  If only there were more Eden's in the world, willing to give so much to help kids who need it, the world would surely be a better place.

Overall, this was a good book and a nice distraction.  Even with my Eden frustration.  All's well that ends well.  :)  I'll be looking for the next book in this series!


The First Book in the Series

Yes, it's true: Once upon a time, best-selling author Loree Lough (literally) sang for her supper, performing before packed audiences throughout the U.S. Now and then, she blows the dust from her 6-string to croon a tune or two for the "grandorables," but mostly, she just writes. (And writes.) Over the years, her stories have earned nearly 100 industry and "Readers' Choice" awards, 7 movie options, and over 80 4- and 5-star reviews.

Loree loves sharing learned-the-hard-way lessons about the craft and the industry, and her comedic approach makes her a favorite (and frequent) guest of writers' organizations, book clubs, private and government institutions, college and high school writing programs both here and abroad.

A writer who believes in "giving back," Loree dedicates a portion of her income to Soldiers' Angels, Special Operations Warrior Foundation, and other worthwhile organizations.

She splits her time between her home in the Baltimore suburbs and a cabin in the Allegheny Mountains, and shares both with her real-life hero Larry, who rarely complains, even when she adds yet another item to her vast collection of lighthouses, wind chimes, and "wolf stuff." 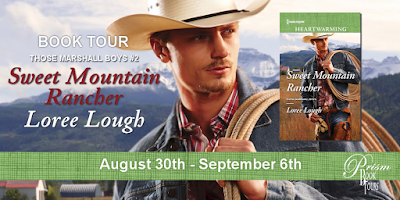