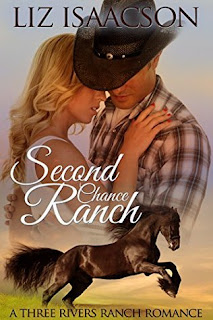 After his deployment, injured and discharged Major Squire Ackerman returns to Three Rivers Ranch, anxious to prove himself capable of running the cattle operation so his parents can retire. Things would be easier if the ranch wasn’t missing 1.6 million dollars, which forces Squire to hire Kelly, the girl who rejected his high school prom invitation, as his accountant.

She’s back in town with her four-year-old son, living in her parent’s basement until she can get her life back together. With fresh ink on her divorce papers and open gashes on her heart, she’s not ready for much beyond her new job on the ranch.

Squire wants to forgive Kelly for ignoring him a decade ago. He’d like to provide the stable life she needs, but with old wounds opening and a ranch on the brink of financial collapse, it will take patience and faith to make their second chance possible.


It's always fun when authors delve into a new genre and write something outside of what is typical for them.  Especially when they do it successfully and I think Elana Johnson (writing as Liz Isaacson) has done very well for her debut contemporary adult romance novel.

I always love a good western with horses and cowboys.  Squire is also military so that brings a few added elements into the mix.  On top of that, it's a second chance love because Kelly and Squire have known each other a long time and Squire kind of carries a torch for Kelly from high school.  There is a bit of a mystery surrounding some missing money on the ranch and Kelly has been hired to find it.  There is even a cute kid and a puppy!  What more could you ask for in a good love story?

Squire and Kelly have some great chemistry that really came through in the story.  I enjoyed their interactions and their conversations.  Even though they both fight it, that attraction could not be dismissed.

Overall and great romantic story!  I settled in and read through it quickly.  I'm looking forward to more in this genre from this author.