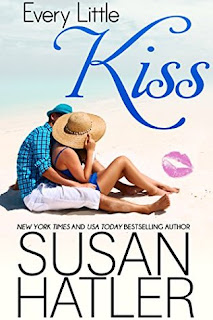 When Wendy Watts left Blue Moon Bay, she vowed never to return to the small coastal town where her parents had abandoned her and her brother. Now she’s a successful Realtor, and a workaholic who stays away from complicated emotions—until her grandmother dies, leaving Wendy the Inn at Blue Moon Bay and mandating that if Wendy sells it, she must put it on the market herself “in person.”

As soon as Wendy arrives in Blue Moon Bay, bad memories, the inn’s poor condition, and her brother’s pleas to keep the inn overwhelm her. Then she meets a sexy laid-back stranger on the beach, and Wendy does something she never does . . . she opens up and confides her problems to him. Since Max Huntington’s only in town for one night, Wendy spontaneously kisses him, hoping to be distracted from her troubles for just one evening.

But when Wendy begins the painstaking process of fixing up the inn in order to sell it, Max tells her he’s staying on longer. He’s enchanted by the charming inn and even more with the kisses they shared on the beach. He wants to help her with the repairs, and she reluctantly accepts his offer.

Although she’s determined to remain detached from the allure of her inn, Blue Moon Bay and Max, every repair, every stroll on the beach, and every moment spent with Max, draws her in and reminds her of the local legend she’d believed as a child: that being kissed by the bay under a blue moon will lead to love that lasts forever.

Well, it's the start of something new from one of my all time fav's, Susan Hatler!  The Kissed by the Bay Series has begun and it's going to be a fun ride.  I already love the setting- it sings to my heart.

Wendy left her home of Blue Moon Bay and vowed never to return, she left behind a group of people she really hurt.  Wendy was trying to escape and avoid dealing with the issues she faced there.  She was determined to build a successful career and a new life far away from her old one.  The process of Wendy's healing was a good one and I enjoyed watching her realize that in leaving her home, family and friends, she was dealing out the same hurts that had been dealt to her.

I think everyone needs a Max in their life.  Seriously, he is the knight on the white horse named Patience.  I liked that Max knew what he wanted.  He was steady and sure and so very kind.

This was such a sweet story.  It was more than just a romance (although the kissing was great!).  It was about reconnecting, forgiving, and loving.  I really enjoyed it!  I can't wait for the next book in the series, The Perfect Kiss, set to come out in November.  I'm really "over the blue moon" about Susan and this series!

Posted by Getting Your Read On at 7:13 AM