A Million Miles Away by Lara Avery 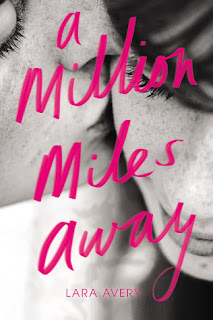 Perfect for fans of Nicholas Sparks, this breathtaking story of love and loss is guaranteed to break your heart and sweep you off your feet.

When high school senior Kelsey's identical twin sister, Michelle, dies in a car crash, Kelsey is left without her other half. The only person who doesn't know about the tragedy is Michelle's boyfriend, Peter, recently deployed to Afghanistan. But when Kelsey finally connects with Peter online, she can't bear to tell him the truth. Active duty has taken its toll, and Peter, thinking that Kelsey is Michelle, says that seeing her is the one thing keeping him alive. Caught up in the moment, Kelsey has no choice: She lets Peter believe that she is her sister.

As Kelsey keeps up the act, she crosses the line from pretend to real. Soon, Kelsey can't deny that she's falling, hard, for the one boy she shouldn't want.

I really liked the blurb for this book so I thought I'd pick it up for review.  My thanks first to the publisher, Little Brown, for allowing me to read and review this title for them.

There was just too much in this book that I found unrealistic and unbelievable.  I am married to an identical twin.  Even when I was first getting to know him, I never confused him with his brother.  They are very alike not just in looks but in personality as well. Anyone caring to know them even a little bit would never confuse them.  A passerby on the street, yes.  Someone who didn't know them well at all, yes.  But someone claiming to love them?  No.  Never.  So, the whole twin confusion thing just didn't fly for me.  Especially since Kelsey and Michelle were so very different in style and personality.

Kelsey is certainly a flawed character without much of a moral compass.  Even flawed, she was likeable and certainly had some redeeming qualities mixed in the book.  I think mentally she showed some growth but for the most part I was frustrated with her.  Peter is a forgettable character.  He was patient and kind in the book but I didn't connect emotionally with him or Kelsey in this book.  Where my heart should have been breaking it just wasn't.

The book from beginning to end was completely predictable, which isn't always a bad thing, but I just felt a little let down.  I don't know, I just didn't buy it.  Even the ending.  I read the book, I finished the book.  I didn't hate it but it was just okay for me.  There was some content in the book that I didn't love (like the swearing and sexual innuendo).  It just didn't need to be there.

Labels: A Million Miles Away, Lara Avery, Military, YA, YA Contemporary Romance