Out of the Ashes by Alicia Buck 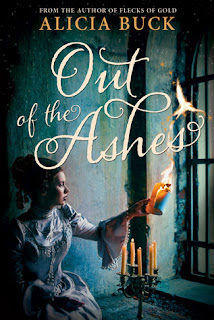 “You’re not going anywhere, Father. You’ll get better,” Ash said, tears obscuring her vision as they ran down her face.
“No, I won’t. It’s better to get used to that fact now, dear.” The rasping of her father’s breathing, and her sniffling echoed through the stone chamber. “I’m so sorry for letting you down this way.”

When Ashelandra’s father dies, she ends up a servant in her own house, instead of the Baroness she was supposed to become. But Ash’s secret sorcery could be the key to winning back her home and following her heart to a future she never imagined. This fantasy-infused Cinderella story puts a magical twist on a classic tale. Riveting and original, it’s a spellbinding read.

This really is a fantasy infused Cinderella.  It's full of magic which puts a fun spin on the old Cinderella classic that we all know and love.

Even though this book started out really slow for me, it ended at a good pace.  The last half of the book the adventure picked up and things started moving.  Up until then I felt like the story was spinning in about the same place with very little forward movement.

Ashelandra is an interesting character.  She passion and conviction and a wee spark of mischief.  Even though plenty of awful things happen to her, Ash finds ways to keep positive and happy.  She puts her focus on what she is trying to accomplish long term and she sticks with it.  In the beginning, Ashelandra is impulsive and doesn't give much thought to those around her but by the end she had learned to think more about her decisions and how they might effect those close to her.

The prince is, of course, dashing, heroic and utterly smitten with Ashelandra.  I really liked him.  I loved the adventure to the magical fantasy world that had been secreted away.

The ending was gratifying and left me feeling satisfied and happy.  So, overall I'd say I enjoyed this book.  The last part much better than the first part.