Janitors: Heroes of the Dustbin by Tyler Whitesides 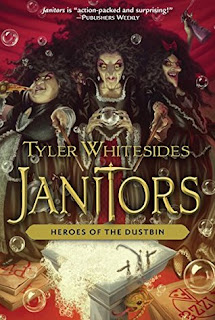 Spencer knew that from the moment the Founding Witches had returned, the Rebel Janitors had begun disappearing. So many schools were defenseless now, the students' minds rotting from Toxite breath while the janitors vanished without a trace. Then it became personal.

Although their enemies are powerful, their allies few, Spencer and his ream of Rebels are not giving up! But what chance do a handful of kids and one rescued janitor have against the combined evil of the Founding Witches and the Sweepers? Can the Rebels close the source of all Glop and stop the Toxites once and for all—or is the world doomed to fall under the control of the sinister Bureau of Educational Maintenance? This explosive series finale is a griping ride through conflicted loyalties and daring escapes, unexpected alliances and betrayals, and an ending you'll never forget!


I'm going to start out by saying that I love this series.  If you are looking for a book with imagination oozing from it's pages, this is where you go.  This Janitors series is packed with fun, adventure and like I said, imagination.  You will never look at cleaning supplies the same way again.

The cover of this book is fantastic.  You get a perfect glimpse of the Founding Witches, their love for pizza and the sink filled with bubbles which are actually cameras.  Those tricky witches watch everyone through those bubbles!

In this final book of the series you will see the Rebels, while few in numbers, coming together in a final effort to stop the glop and toxites and the BEM.  This book has an excellent pace to it.  There will be no falling asleep during this book!  There are some big battles going on.  The fight between good and evil is strong in this book.

As per most last books of the series, I am equally happy and sad.  It's always feels good to have a conclusion- an ending to wrap my heart around.  But, it's also sad to say goodbye to characters you've had so much fun with.

This book isn't out today, but it is set to release on Tuesday, Sept. 8th.  That's just a few days from now!  If you have middle grade readers or younger children around you, I would so highly recommend this series for them.  It's simply fantastic.

My thanks to the publisher, Shadow Mountain, for allowing me to read and review this book for them.
Posted by Getting Your Read On at 7:18 AM