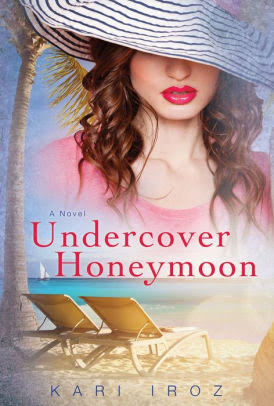 Wedding bells are finally ringing for Jacklyn “Jack” Wyatt and her FBI-agent fiancé, Damon Wade. After their adventurous beginning, the happy couple finds the relative calm leading up to their big day a huge relief. Unfortunately, it seems the peace and quiet were too good to last. As they embark on their honeymoon, a weeklong cruise, Jack can’t shake the feeling that something is off with her new husband. When she stumbles upon a secret plot—one in which her husband is a key player—she realizes this getaway will be anything but smooth sailing. When she delves into the shady happenings aboard the ship, Jack realizes Damon’s involvement is just the tip of the iceberg—she has become an unwitting player in a deadly conspiracy, and in such close quarters, there is no escape. Now, Jack has no choice but to work with her new husband to unravel the truth before their happily ever after—and their lives—are ended all too soon.

Just as an FYI up front, this book contains some religious elements specific to the LDS religion.

This is the third book in this series even though it isn't labeled as a series.  I don't know why it isn't.  (I'll list all three books below)  Even though the author does a good job of filling in the past with enough to get by, I would highly recommend reading this series in order.  It will mean so much more if you do.  And it's such a fun set of books, you really can't go wrong.

Jacklyn "Jack" is an amusing character.  She always has an inner dialogue running in her head and most of the time it is greatly amusing.  I like to be amused.  Actually, Jacklyn reminds me a bit of Julia in the Spinster series if you've read those.  Maybe a titch less sarcastic, but it's the first person inner dialogue that makes me feel that way.

The first half of this book is really more familial.  Jack and Damon are getting married so we see the build up to that.  Bridal shower, picking up the dress, wedding preparations.  Then they leave on their honeymoon and that's where things really start to pick up.  I enjoyed the first part of the book well enough but it was the second half that finally sucked me in and had my undivided attention.  The pace picked up, the danger increased and I felt more invested in the plot.  I think I like the previous book better but this one was still very good- fun mixed with danger in an exotic location.  Maybe not the best book to read on a cruise ship vacation though!!  haha.

a Rafflecopter giveaway
Posted by Getting Your Read On at 3:42 PM