Beneath an Italian Sky (An American Heiress) by Stacy Henrie + Win This Book! 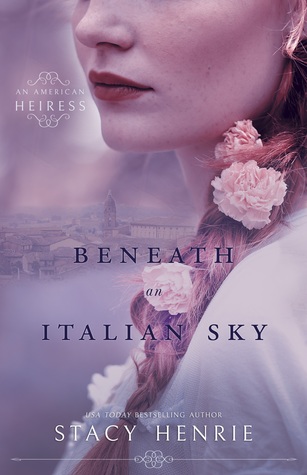 --1908--
American heiress Clare Herschel made what she hoped was a love match when she married the handsome, witty Emmett Markham, the Earl of Linwood. A little over a year into her marriage, though, Clare finds herself wintering in Sicily—alone. She is sure the mild climate is the answer to avoiding another miscarriage and Emmett’s apparent indifference, so she’s determined to remain in Italy as long as possible. The last person she expects to show up at the villa is her husband, especially when Emmett confesses he’s there to convince her to return to England.

As the only surviving son of a marquess, Emmett has done everything his father has asked of him—even agreeing to run for a seat in the House of Commons. However, this latest task comes with a nearly impossible caveat. He must convince his wife Clare to come back to England with him in order for them to appear to be a happy couple for his political campaigning. Emmett isn’t confident Clare will agree to the plan, though, not when she seems to want nothing to do with him or the life they’d begun building before she abruptly left him for Italy.

When a massive earthquake strikes Messina, Sicily, claiming the lives of thousands, Clare and Emmett must set aside their mutual misgivings about their marriage in order to survive and lend a helping hand to others. But in the wake of the destruction, they begin to realize they’ve been given a chance to decide if their love is stronger than the upheavals of the past.

I've been looking forward to this book for so long.  Well, ever since the last book I read in this series.  This book officially released yesterday so you can pick it up too!

I love when books are based around real historical events.  This one is set in Sicily when a massive, devastating earthquake hits.  The upheaval, turmoil and desperation were clearly present and I was caught up in the story, the characters and the emotion.

Both Clare and Emmett are so insecure.  They don't have very good communication skills which of course leads to so much misunderstanding and the only way to work through the mess is to talk it out.  That proves to be a bit difficult with an earthquake, trying to stay alive, and oh, a reporter who watches their every move.  But both Clare and Emmett are good people, trying to find their way and prove their worth.  I was really grateful to have both points of view throughout the story so I could know them both and love them equally.  The flashbacks helped provide the base for their initial love and gave me hope as a reader.

Even though this story is full of tragedy, it never felt overwhelming.  This author has a magical, peaceful way of writing.  The words fall gently and I love that.  I really enjoyed this book and I can't wait for the next one coming out in the fall.

a Rafflecopter giveaway
Posted by Getting Your Read On at 7:44 AM