Always You (Falling For You #1) by Lucinda Whitney 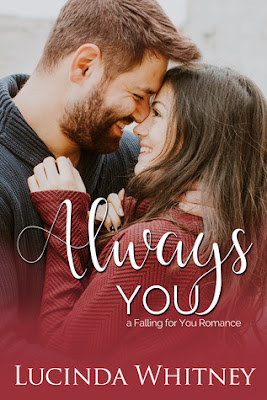 Simon Ackerley arrives in Lisbon for his temporary job as a consultant, not expecting to find his secret penpal easily. After all, he doesn’t know what she looks like or what her real name is. But when a biking accident reveals that Simon’s prickly co-worker Isabel is the elusive Amélie, he has to win her trust before he can confess his true identity. Isabel Antunes is content with her life as director of the English Academy in Lisbon, until the chairman hires a consultant without her knowledge. Despite Simon Ackerley’s repeated assurances to the contrary, Isabel believes he’s after her position, and she won’t hand it over without a fight. As if dealing with him at work isn’t enough, he shows up at her book club as well. Her only solace is writing to the penpal she knows simply as Elliot.As they work together, Isabel realizes Simon is nothing like her first impression and a tentative friendship grows between them. But how can she explore the possibilities when her heart belongs to Elliot? Always You is a sweet secret relationship romance and it can be read as a standalone. *Part of this story was previously published as One Small Chance. It has been rewritten and expanded to include new content and a swoony epilogue.*

I read this story previously when it was titled One Small Chance and I loved it.  It has now been expanded a bit with a bonus epilogue!  These added scenes were fun and I loved reading this story all over again.

Simon and Isabel's first meeting was not a roaring success.  He crashes into her while riding his bike.  😳  Things don't get much better from there- at least for a little while.  Isabel is not impressed even though she is slightly attracted to Simon.  Isabel has cold to start in book.  As she begins to thaw I liked her more and more.  Simon and Isabel learn how to work together and that leads to friendship.  Simon is a champion in my eyes.  He is so patient, gentle and kind to Isabel even when doesn't treat Simon the same way.  That patience pays off in the end so yeah, champion.

I loved the setting which made me want to visit Portugal.  It sounds just beautiful.  The penpal aspect gave this story an established history between the characters even if Isabel didn't realize it until later in the story.  The growing, expanding relationship between Simon and Isabel was satisfying and I really did love the ending.  So sweet.

Lucinda Whitney's books are always a delight to read.  Her firsthand knowledge of Portugal always shines though in her books, making me feel like I am there too.  If you haven't had a chance to read any books by this author, you should!  Start with this one.  You won't be sorry.

Posted by Getting Your Read On at 3:29 PM