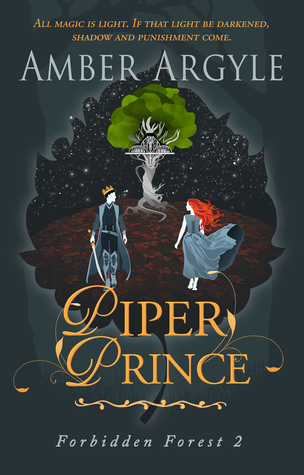 Can you hear him? The beast is coming for you. Long ago, a curse fell upon the land—a curse of forgetting and wraiths, a curse that ensured no daughters were born to the pied pipers in over three centuries. The pipers were all that stood between humanity and utter destruction, so they did the only thing they could: they stole the daughters of the nearby kingdom with their hypnotizing melodies. With the sons born from those unions, they continued to defend against the wraiths and fight the curse, even though they were slowly losing.

Larkin was one of those daughters. Stolen by Denan and married against her will, she found herself falling in love with the very man who had taken everything from her, the man who had made her a princess. Together, they discovered that she was the first woman in three centuries to possess the magic of the pipers, and therefore, the only person capable of breaking the ancient curse.

But breaking the curse means unraveling the very past the curse is intent on keeping secret. The answer lies buried in the crypts of the Black Druids, men who consider Larkin a traitor they’ll kill on sight. Embedded in the intrigues of their court, she unearths a dark conspiracy destined to hasten the destructive power of the curse—a conspiracy aimed at destroying her piper prince.

The Piper Prince is the second book in the Forbidden Forest series.  You should definitely read these books in order.  It took me a quick minute to remember exactly where the last book left off but as I read, things started coming back to me and I was once again sucked into Larkin's world.

Amber Argyle is excellent at creating characters that are clearly defined, layered and interesting.  This story has a constant forward momentum that kept me on the edge of my seat and anxious.  Larkin's world is in constant turmoil with different groups of people warring against each other.  It's a violent world, and Larkin, Denan and company are always on the move and always fighting.  Secrets are unraveling slowly but surely.  I was fully invested in the story, these characters and everything that was happening.  What a fantastic adventure!  I can't wait for the next book because as per usual with this author, I am left in a place where there isn't much resolution.  I really want the rest of the story!

- I received a complimentary copy of this book.  All opinions expressed are my own.
Posted by Getting Your Read On at 8:57 PM