A Song for the Stars by Ilima Todd 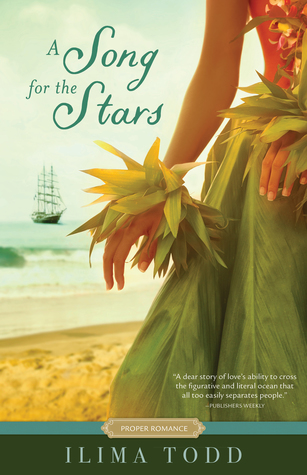 Hawaiian Islands, 1779
As the second daughter of a royal chief, Maile will be permitted to marry for love. Her fiancé is the best navigator in Hawaiʻi, and he taught her everything he knows—how to feel the ocean, observe the winds, read the stars, and how to love.

But when sailors from a strange place called England arrive on her island, a misunderstanding ends in battle, and Maile is suddenly widowed before she is wed.

Finding herself in the middle of the battle and fearing for her life, Maile takes John Harbottle, the wounded man who killed her fiancé, prisoner, and though originally intending to let him die, she reluctantly heals him. And in the process, she discovers the man she thought was her enemy might be her ally instead.

John has been Captain James Cook’s translator for three voyages across the Pacific. He is kind and clearly fascinated with her homeland and her people—and Maile herself. But guilt continues to drive a wedge between them: John’s guilt over the death he caused, and Maile’s guilt over the truth about what triggered the deadly battle—a secret she’s kept hidden from everyone on the island.

When Maile is tasked with teaching John how to navigate using the stars so he can sail back to England, they must also navigate the challenges of being from very different cultures. In doing so, they might also find the peace that comes when two hearts become one.

This story was so lovely.  I felt transported to another place and time and my heart expanded with every turn of the page.  Knowing that this story was based on the true story of the author's ancestors made it even more intriguing.  The whole story felt fresh and new- so unlike all the other books I've been reading lately.

The Hawaiian people have such a rich history.  Their culture and customs have always fascinated me.  Imagine being from another continent and country and coming across these people for the first time in history.  This book sparked all kinds of thoughts in my mind.

I love the feeling of being caught up in a story and not wanting to put it down.  This book reads so beautifully and I just loved it.  The emotional feelings were all there along with the flutters in my tummy at the slightest touch of a pinky finger.  I feel fortunate to have been able to read this book.  It's one of my favorites this year so far.