In the Pursuit of Eden by Stephanie Fowers 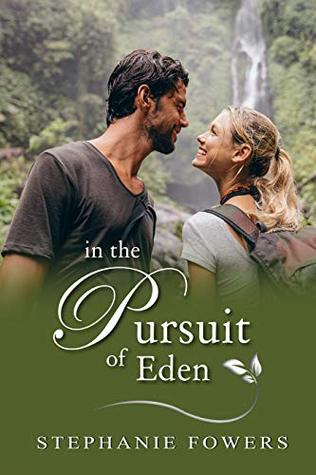 Everyone wants to find Eden’s Paradise. Except Ivy.

Ivy is a city girl through and through. So when she follows her twin brother into the forests of the Uintas to make a documentary about looking for a treasure that’s plagued her family for generations, she’s a little out of her element. It's the same treasure that ended her father's life. Add to that her run-ins with the dashing, but infuriating Aiden Hunter. The Southern hottie has rescued her so many times that it’s getting embarrassing. Of course, she’d be more grateful if she didn’t suspect him of putting her in danger in the first place—a danger that keeps growing the closer they get to the truth.

Forced to be allies, the two are thrown into each other’s paths, and she realizes that she has more in common with him than she thought. While Ivy searches for clues in the journal of a wayward saloon girl, Eden, to discover a life that mirrors her own, Hunter fights the demons in a past that seems tangled up in hers. His secrets are hers. The only way to get at the truth is to find an uneasy truce… and maybe something more because Hunter may not be the enemy. In fact, he may be the one who needs rescuing. Now, Ivy has to figure out who she wants by her side, and what she’s willing to give up for love.

After all, Paradise was never meant to be found alone.

I love a good adventure/love story and this book really filled that love.  The adventure was on from beginning to end in this story- stuffed full.  There were moments of light playfulness and flirty banter intermingled with the outdoor excursions and adventuring.  There were good guys and bad guys and sometimes it was hard to tell who was who.  I liked that a lot.  This whole book played out just like a movie in my head which was fantastic.

Ivy definitely seemed to find herself in less than flattering circumstances often- at least in the first half of the book.  They made me smile.  Especially when her Southern hottie kept stepping in to "save" her.  There was some good chemistry there.

This story was long.  So, so long.  I didn't realize just how long until I got into it.  Wow.  It's a long story- over 500 pages.  I definitely felt that while reading it but I was invested the whole way through.  This story was so much fun!

- I picked this book up on Kindle Unlimited.
Posted by Getting Your Read On at 7:08 PM

Labels: Clean Romance, In the Pursuit of Eden, Stephanie Fowers