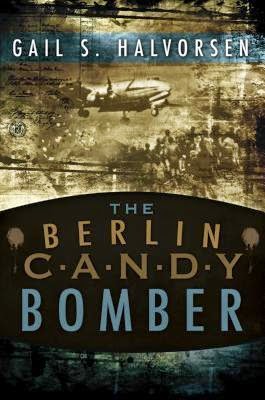 The Berlin Candy Bomber is a love story-how two sticks of gum and one man's kindness to the children of a vanquished enemy grew into an epic of goodwill spanning the globe-touching the hearts of millions in both Germany and America.

In June 1948, Russia laid siege to Berlin, cutting off the flow of food and supplies over highways into the city. More than two million people faced economic collapse and starvation. The Americans, English, and French began a massive airlift to bring sustenance to the city and to thwart the Russian siege.

Gail Halvorsen was one of hundreds of U.S. pilots involved in the airlift. While in Berlin, he met a group of children standing by the airport watching the incoming planes. Though they hadn't asked for candy, he was impressed to share with them the two sticks of gum he had in his possession. Seeing how thrilled they were by this gesture, he promised to drop more candy to them the next time he flew to the area.

True to his word, as he flew in the next day, he wiggled the wings of his plane to identify himself, then dropped several small bundles of candy using parachutes crafted from handkerchiefs to slow their fall. Local newspapers picked up the story. Suddenly, letters addressed to "Uncle Wiggly Wings" began to arrive as the children requested candy drops in other areas of the city.

Enthusiasm spread to America, and candy contributions came from all across the country. Within weeks candy manufacturers began donating candy by the boxcar.

In May 1949, the highway blockade ended, and the airlift ended in September. But the story of Uncle Wiggly Wings and the candy-filled parachutes lives on-a symbol of human charity.

* Amazon * Goodreads * Cedar Fort *
Sometimes you read books to escape from reality and go someplace far, far away.  Sometimes you read books to learn something new.  Sometimes you read books to be inspired.  This book gave me all the previous mentioned things plus more.
I love reading stories about ordinary people who do extraordinary things.  These things come about because people like Gail Halvorsen choose kindness when a situation is placed before them.  Gail's kindness led to more kindness.  People saw his kindness and wanted to be a part of it.  From there it ballooned into something grand that involved people all over the world.  All because one man extended a kindness one day to a few children who desperately needed some kindness and care.  I love that.
Gail Halvorsen has roots right where I live today.  It was fun to read of his early years in Bear River Valley.  I could imagine him flying right over my house as he trained to be a pilot.  My kids attend the same high school he attended.  It's a small world after all.
I learned more about the events and details leading up to Gail Halvorsen's part in the war efforts and about his life.  I loved all the pictures in the book.  They really helped give me a sense of how things were.  There were lots of pictures!  This book is a great reminder to me that kindness matters.  You never know when a kind act can change the life of someone else.  Kindness is contagious.  People respond to kindness.  Kindness matters.  A lot.
I am grateful for people like Gail Halvorsen.  I'm grateful for their examples that inspire me to be better and do better.  I pay honor Uncle Wiggly Wings and I thank him for telling his story.  I loved it.