The Noble Servant by Melanie Dickerson 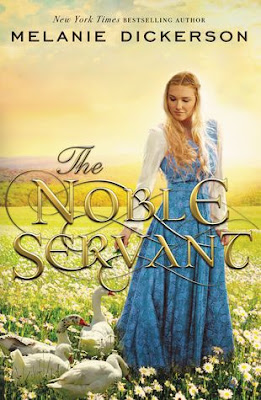 She lost everything to an evil conspiracy . . . but that loss may just give her all she ever wanted.

Since meeting Steffan, the Duke of Wolfberg, at Thornbeck Castle, Lady Magdalen has not been able to stop thinking about him. She knows—as a penniless lady with little to offer in terms of a dowry—she has no real hope of marrying such a highly titled man, so it comes as a great surprise when she receives a letter from him, asking for her hand in marriage.

But all is not what it seems at Wolfberg Castle. Steffan has been evicted by his scheming uncle, and his cousin has taken over the title of duke. Left for dead, Steffan is able to escape, and disguised as a shepherd, hopes to gain entry to the castle to claim the items that will prove he is the true Duke of Wolfberg.

Journeying to the castle, Magdalen has no idea what awaits her, but she certainly did not expect her loyal maidservant to turn on her. Forcing Magdalen to trade places with her, the servant plans to marry the duke and force Magdalen to tend the geese.

Without their respective titles—and the privileges that came with them—Steffan and Magdalen are reunited in the shepherd’s field. Together they conspire to get back their rightful titles. But they must hurry . . . or else they risk losing it all to the uncle’s evil plan.

Magdalen (poor girl) has a lot of rotten things thrown at her.  She has an awful mother, she is betrayed by people close to her, she is put in a position doing things she has no clue about, people are mean to her, she feels the weight of letting her people down, . . .  I'm telling you, Magdalen is having a rough time.  Plus, one of the geese bites her.  Poor Magdalen.  Despite all that, Magdalen is a thinker and a fighter.  She is always trying to find a way to change her circumstances and put things right.  I really loved her pluck.

Steffan isn't faring much better.  Well, he has a bit of money, but other than that, his circumstances are just about as grim.  I loved the when Magdalen and Steffan were working together and making each other stronger.  Of course, even that wasn't all smooth sailing, but the struggle was worth it in the end.

I really enjoyed this book.  It was a fun, adventurous journey with a happily ever after ending.  What could be better than that?!

This may be my first MD book, but it won't be my last!  I hope to read many more books by this author and maybe convince my daughter to read them as well!

- I received a copy of this book from the publisher via NetGalley.  A positive review was not required and all opinions expressed are my own.