Meet Me At Sunrise (Romano Family #2) by Lucinda Whitney 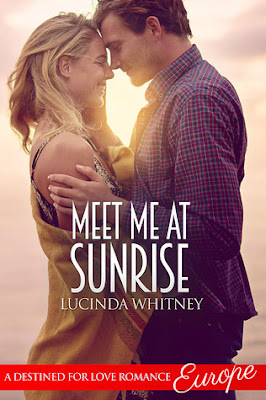 Finding love in eight days was not on the itinerary…

Between a bad breakup and a rocky relationship with her overbearing father, twenty-three-year-old Vanessa Clark has a history of being disappointed by the men in her life. So when her long-lost grandfather reenters the scene and persuades her to tour northern Portugal on one of his cruise ships, Vanessa boards the vessel looking for answers about her estranged family, not looking for love.

Captain Matias Romano has enough to worry about without having to babysit his boss’s spoiled American granddaughter, no matter how good-looking she is. First the issue with the refrigerators, and now the ship's computers are malfunctioning—he’ll be relieved when this trip is over and he can get back to business as usual.
But as Matias plays tour guide on Vanessa’s excursions and they work together to investigate a series of suspicious accidents aboard, they both realize there’s more to the other than first impressions.

Can Vanessa work through her complicated past to make room for Matias in her future, or will they pass like ships in the night?

Releasing today!  This is the second book in the Destined for Love Romance Europe series and I'm so excited!  There are six books total, each written by a different author.  The authors in this series are some of my favorite.  I'm reviewing all but the last book in this series so that makes me happy!

This book doubles as a part of this series and also another series- Romano Family- by the author, Lucinda Whitney.  It's a fantastic addition to both.  I've been anxiously waiting to read about Matias since finishing Hold Me at Twilight.

I really want to take a river cruise one day.  It sounds fantastic.  Matias is the captain of a river cruise ship and meets Vanessa in less than ideal circumstances.  Both Matias and Vanessa make snap judgments about each other which, of course, are wrong.  For a story that happens in 8 days, things really didn't seem that rushed.  There was a natural development of feelings between the main characters and a progression of the plot that made me feel like it was longer than eight days.

The ending felt good.  There was resolution all the way around with the romance, the family dynamics and the investigation and I'm a girl that likes things tied up with a pretty bow so that was awesome for me.

Books in the A Destined for Love Romance: Europe series:
— Desperately Seeking Mr. Right by Sally Johnson
— Meet Me At Sunrise by Lucinda Whitney
— Once Upon a Wish by Danyelle Ferguson
—12 Days to Love by Lisa Swinton
— Kiss Me in the Moonlight by Lindzee Armstrong
— Never Trust the Rain by Laura D. Bastian