Compassionate Soldier: Remarkable True Stories of Mercy, Heroism, and Honor from the Battlefield by Jerry Borrowman 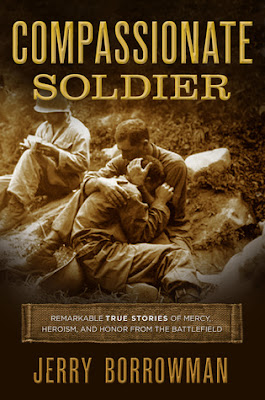 Compassionate Soldier illuminates some of the most fascinating and yet largely unknown stories of men and women whose humanity led them to perform courageous acts of mercy and compassion amid the chaos and carnage of war. Arranged by war from the American Revolution to the Iraq War and global in perspective, it features extraordinary stories of grace under fire from valiant soldiers and noncombatants who rose above the inhumanity of lethal conflict and chose compassion, even knowing their actions could put their lives and liberty at risk.

Included in this collection are the stories of Richard Kirkland, a Confederate soldier during the Civil War who disobeyed orders and brought blankets and water to the wounded from both North and South during the Battle of Fredericksburg; Patrick Ferguson, a British soldier during the American Revolution who had the chance to kill George Washington, but refused to shoot a man in the back; and Oswald Boelcke, a German WWI flying ace who was one of the most influential tacticians of early air combat, but was known for making sure the airmen he shot down made it to the ground alive.

These inspirational stories illustrate that even in the midst of unspeakable horrors of war, acts of kindness, mercy, compassion, and humanity can prevail and, in doing so, expand our conventional thinking of honor and battlefield glory.

I love history and I love true stories in history- especially ones that inspire me and bring hope.  This book is full of stories of people who showed compassion, kindness or mercy during the struggle of war.

The author goes into some depth to describe the events surrounding each person and their circumstances.  This really helps set the tone for what made their acts so profound.  I received an ARC copy of this book so mine didn't have the photos that I think are included in the final copy.  I wish I could see those pictures.

War brings such devastation and loss.  These stories brought this out but I love reading about people who, in the midst of such devastation and loss, still found a way to extend kindness.  I loved the story of Richard Kirkland who heard the cries of the wounded and dying during an ongoing battle and just had to do something to help.  At the risk of his own life, he carried water to men on both sides of the battle.  He was a young man and died later in a battle but his kindness and mercy will always be remembered.  The other story I really loved was about Edith Cavell who was a nurse and helped wounded men recover and then escape the enemy during WWI.  She put her life at risk and was executed for it.  I loved her integrity because at the end, even though she was warned that people were coming for her, she continued on with her nursing and care.  She didn't run, she didn't lie and she didn't apologize for helping save people.  She died with her head held high, full of confidence and truth.  These are only two of the stories but probably my favorites though all of them are good.

This book was hard to read in many ways, but also brought the hope that good things can still happen in the middle of awful events because of good people who care.  I love that this collection of stories honors a few of those people.