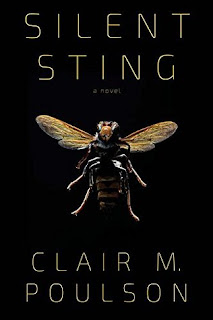 Catastrophe is looming over the Central Valley of California. The honeybees, vital to the economy of this agricultural epicenter, are dying at an unprecedented rate. The U.S. government is desperate for answers, and researchers at the University of California–Riverside are tasked with providing them. But when the professors assigned to the investigation seem to be systematically dying under mysterious circumstances, it becomes clear that there is something sinister at play. Following the murders of her mentors, it’s up to entomology student Tiana Lambrose to move forward with the research. Special Agent Stu Whiteleather, part of a team of FBI agents assigned to assist in the investigation, is immediately drawn to the lovely entomologist. Together, they discover a breed of bees engineered to be killing machines, which, despite Tiana’s expertise, are like nothing she’s seen before. The question is, who could possibly have the sophisticated technology to engineer these specialized insects and for what motive? The perpetrator will stop at nothing to keep investigators from finding the answer. As threats to Tiana’s life escalate, Stu must battle an unknown foe to protect the woman for whom he has come to care before she becomes the next victim.

Whooee, I loved the premise of this book.  What a great idea!  Seriously.  Honey bees are dying at an alarming rate and then someone finds a drone bee that is made to kill people.  It has a camera on it so the operator can see to fly it and it has deadly poison on it's stinger.  Creepy crazy, right?

The beginning of this book pulled me right in.  Immediately I was in the thick of the honey bee problem and feeling the desperation and magnitude of the situation.  As the book progressed, I'll admit that it lost a bit of it's appeal.  I'm not sure exactly where things started to slip for me, but it all started feeling a bit off.  A few of my peeves are nit picky (the character's name- Stu Whiteleather?  Really?  uugh.) (the girls sound like boys) and some are more valid and less nit picky, I think.  The conversations when read aloud are sometimes stilted and not how regular younger people would talk, especially in extreme situations.  The main relationship lacked depth.

I felt like there were situations and scenes that were just sort of randomly thrown in for the sake of making it more, I don't know, exciting?  Or maybe just more?  It didn't feel necessarily realistic- details were glossed over.  And the ending?  No.  Just no.

Having said that, I would give this book a solid 3/5 stars.  Like I said, the premise was fantastic and I loved the whole idea even if the execution was lacking a bit in parts for me. It gave me creeps to imagine how easily something like this really could happen and how devastating it would be.  I grew up in California and I know someone who deals with honey bee's for a living.  This is a chilling scenario to think about.

I love that the cover is a good representation of what is inside.