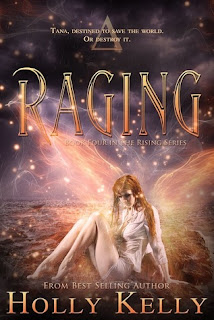 For two thousand years, a betrayer has occupied the throne on Olympus. Hungry for power, he has wreaked havoc among the gods, as well as the humans on earth. But a spark of hope ignites in the form of four young women—ones who are destined to free the true king and save the human world. Two have been found, and the others must be located before it's too late.

Drakōn would love nothing more than to turn his back on the whole thing. It's not that he doesn't care about humans, but he has his own world to worry about. But then, he is given an impossible task—one he finds himself unable to refuse. He is charged with protecting a woman, but not just any woman—Tana, goddess of wind and fire.

Tana is more than he bargains for. Sentenced to an eternity of imprisonment for burning hundreds to death in a fiery inferno, she has powerful enemies. Drakōn finds himself facing off with those adversaries even as he questions why he doesn't simply destroy her himself. But Tana is one of four destined to save the world. That is, if she doesn't destroy it first. And Drakōn? He may just lose his most guarded possession. His heart.

I have been reading and reviewing this series since the beginning.  This is the final book in this Rising series and I'm both happy and sad to see it ending.  Resolution always feels good and that's what this last book brought me but it's always sad to come to an end of something that you've loved reading.

This book focuses on two main characters (Tana and Drakon), but everyone from previous books makes appearances here along with a few new minor characters.  Tana is powerful and dangerous.  So is Drakon, but in different ways.  I love how he has the ability to calm her fire.  Literally.  Of course he has to love her.  She would fry anyone else and that would just be sad.

The conflict comes to a climactic explosion and brings everyone together to defend the humans and gods alike.  It was fun and fast paced.  I will miss this overlap of the world I know and the world of mythological gods and underwater beings.

I'm looking forward to what comes next from Holly Kelly.  I'll be on the lookout!

If you haven't started this series yet and you would like to, the first book, "Rising", is free on Amazon right now.  Find it here.