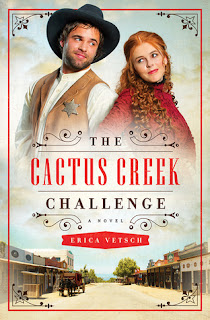 Anything he can do, I can do better. At least that was what Cassie Bucknell thought before she pinned on Ben Wilder’s badge and took to patrolling the streets of Cactus Creek, Texas. Cassie has been in love with Ben since primer school, but Ben treats her like a little sister. When they are picked to swap jobs for a month as part of the annual Cactus Creek Challenge in their Texas hometown, the schoolhouse is thrown into an uproar, the jail becomes a temporary bank vault, and Cassie and Ben square off in a battle of wills that becomes a battle for their hearts.

Reviews for this book were popping up and people were saying how fun this book was so I decided that I need to check it out for myself.  I love a good, fun romance.

It took me a little while to get into this book.  It jumps between four main characters and at first I found myself a little annoyed that there were so many people.  I wanted to just focus on the one couple or the other.  Not both.  From the blurb, it sounds like it is just one couple, but it isn't.  It took awhile for me to settle in and know the characters enough that I cared about them all but it did happen.  I became invested in each one of them.  Things start out a little slowly but the momentum builds and by the end things are really rolling along.

I enjoyed Cassie and her inner turmoil the most.  She is trying so hard to get Ben to realize that she is a woman and not a kid anymore.  Ben is so dense.  It's all very amusing.  I enjoyed the dialogue and the sparks between all the main characters.

I thought the premise of the book was creative and different.  The characters switch jobs for a month and Ben becomes the school teacher and Cassie becomes the sheriff.  The other couple switch also and he becomes a baker and she runs the livery.  It's all very comical and I enjoyed this book a whole bunch.  I'll be on the lookout for the next book in this series by this author.