A Healing Heart (Riverview Series #1) by Melissa A. Hanson 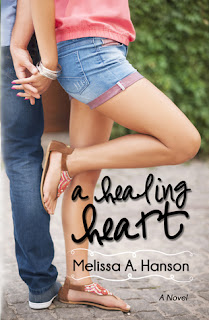 On a bitter cold winter night Bailey Walsh’s family was killed in a traffic accident. Two years later as she lives with her aunt and uncle in Southern California, Bailey is still plagued by the nightmares of that terrible night. Everywhere around her are reminders of what she lost. Even her aunt, in a cruel twist of fate, is not just her mom’s sister, but her identical twin. Babysitting Riley, a spunky two-year old, is a sweet distraction and one constant light in her life. One day as she takes Riley to the park she meets Collin McKenna, a senior at her high school and her life is changed forever as he helps her find herself and realize her life is worth living. As the romance between them grows her broken heart begins to heal. However, still nagging in the back of her conscious is the fear that her new found happiness could come crashing down and she could lose everything she loves, yet again. Outside forces begin to tear them apart and Bailey must learn to trust in herself and realize that she is worthy of happiness. That sometimes love and healing comes in unexpected forms.

A Healing Heart is what I would summarize as a YA clean romance.  It is simplistic in delivery and told in the first person from multiple points of view.  I would say that the overall feel of the book would lend itself to be on the younger side of the YA range.

Bailey is a character you cannot help but have sympathy for.  She has suffered greatly in her young years and lost much.  As a reader, I could see growth in Bailey and that is always important.  Bailey really is on a journey of healing in so many ways.

I liked this book but I never really had that emotional connection to the characters.  It felt more like telling the whole time.  We did this and then we went here and then I did this and so on.  First person can be tricky that way, I think.  The book felt a little long to me but as I said before, I did like it.

Content:  Some instances of mild swearing.  Mention of waiting for marriage to have sex.