A Little Blackmail by Helen Conrad + $40 and book Giveaways 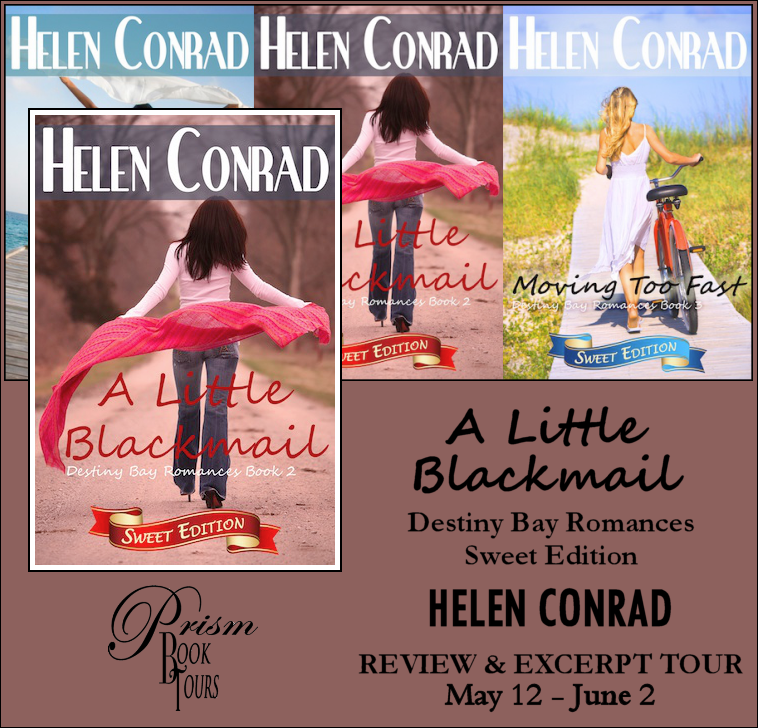 On tour with Prism Book Tours

Welcome to my tour stop for the
A Little Blackmail
Destiny Bay Romances: Sweet Editions
by Helen Conrad

Special Price!
A Little Blackmail is only $0.99 for Kindle from now until Sunday, May 25th! 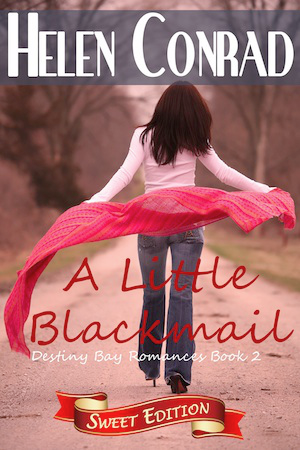 Sometimes you have to break the rules to right a wrong.

Janet Cardona is usually a by-the-book good girl–but when Matt Carrington won't give her cat back, she sees red. Rules mean nothing when there's an animal to be saved. So when she's caught in a burglary and blackmailed for it, she finds she can't refuse. Matt only needs her to pretend to be his wife for a day or two so that he can run a scam he's involved in. But once the pretense gets going, he begins to yearn for the real thing. Now Janet has to decide if she can let herself fall for a con man.

“A Little Blackmail” is the second book in a series of books by Helen Conrad that I am so happy to be reviewing.  Originally these books were published under different titles and with a lot more steam to them.  Here’s what the author has to say about them.  “The Sweet Editions cover the same stories, but with most expletives and all explicit sexual descriptions removed, rewritten and softened for those who prefer it that way.”  That would be me.  And I’m so glad to see this author do this.  It makes me so happy.  J

“A Little Blackmail” was such a fun read.  I loved the storyline and the interactions between Matt and Janet.  The pull between them is magnetic and sexy but this book keeps things PG.

Janet is a girl who loves her cat.  She loves that cat so much that when it mistakenly ends up at the animal shelter and is adopted by someone else, she will go to any length to get him back.  Including breaking into a home in the middle of the night, dressed as a burglar, ready for the take back.  But, oops, she happens upon Matt instead, soaking in the hot tub and is caught.  Best oops ever.  haha

Matt comes off as the bad guy at first but as bits of the story come out, we learn right along with Janet what Matt is really up to.  Maybe he isn’t quite as bad as he first appeared to be.  He sure is attracted to Janet- her goodness and honesty as well as her looks.  The tension is always there between Matt and Janet.  It was good stuff as a reader.  I blew through this book so fast.  It was an awesome way to spend a lazy, rainy day at home.  (If I can’t get out and plant my garden, I might as well be reading!)

The end of the book takes us to the wedding of Reid and Jennifer from the previous book.  It was good to get a glimpse of the happily ever after for them.  I love happily ever after’s.  And I can’t wait to read the next book in this series, “Moving Too Fast”!  Look for my review next week.  Same time, same place.  J 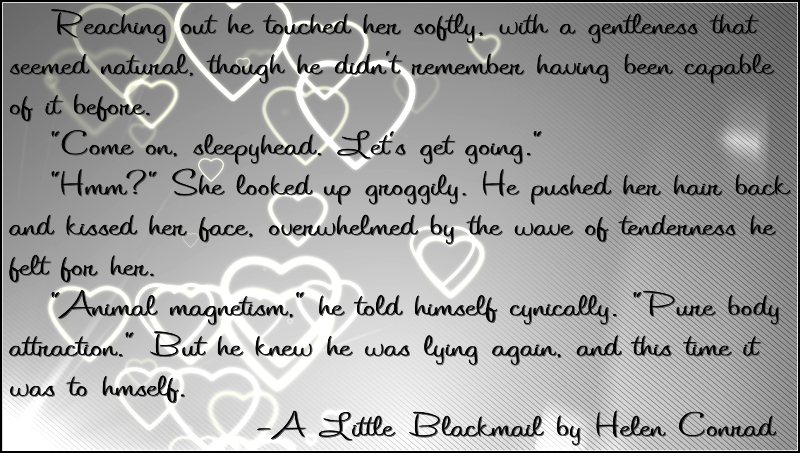 Helen Conrad is an award-winning, bestselling author of more than 90 romances (over 15 million copies sold) published under various pseudonyms with Harlequin, Silhouette, Loveswept, and others. She is currently revamping and rewriting much of her backlist—mainly into the Destiny Bay Romances Series. The first six, the Forever Yours Series, are being rewritten as Sweet Editions.

A Little About the Destiny Bay Romances: Sweet Editions
From Author Helen Conrad

"The Destiny Bay Romances take place in the sort of beach town I've always loved--and now I live in one! But writing about beach towns came first and this series is centered on the rich, influential Carrington family living along the California Coast, and in Hawaii. These are good-looking, fast-driving, hard-hitting men and women whose impulses lead them into trouble every time--and inevitably to fall in love.

The original series includes language and love scenes that aren't, for the most part, especially harsh and explicit--but some of my readers from my years writing sweets for Harlequin as Raye Morgan have asked if we couldn't have sweet and clean versions--and I thought--what a good idea!

These are basically the same stories...but with the conflicts softened a bit, the language cleaned up, and no explicit love scenes. There are still a few adult situations, but they're muted. Consider these the PG versions.

I hope you enjoy them!"

The other stops on this tour:

May 21
My Love for Reading Keeps Growing
Tressa's Wishful Endings
All That's Written ...
I Am A Reader
My Ereader and Me

May 22
The Wonderings of One Person
Mythical Books

Moving Too Fast
May 26 - Book Intro

May 28
All That's Written ...
Mythical Books
I Am A Reader

May 29
The Wonderings of One Person
Katie's Clean Book Collection