Heavenly Bites Collection now at Amazon for only $.99! 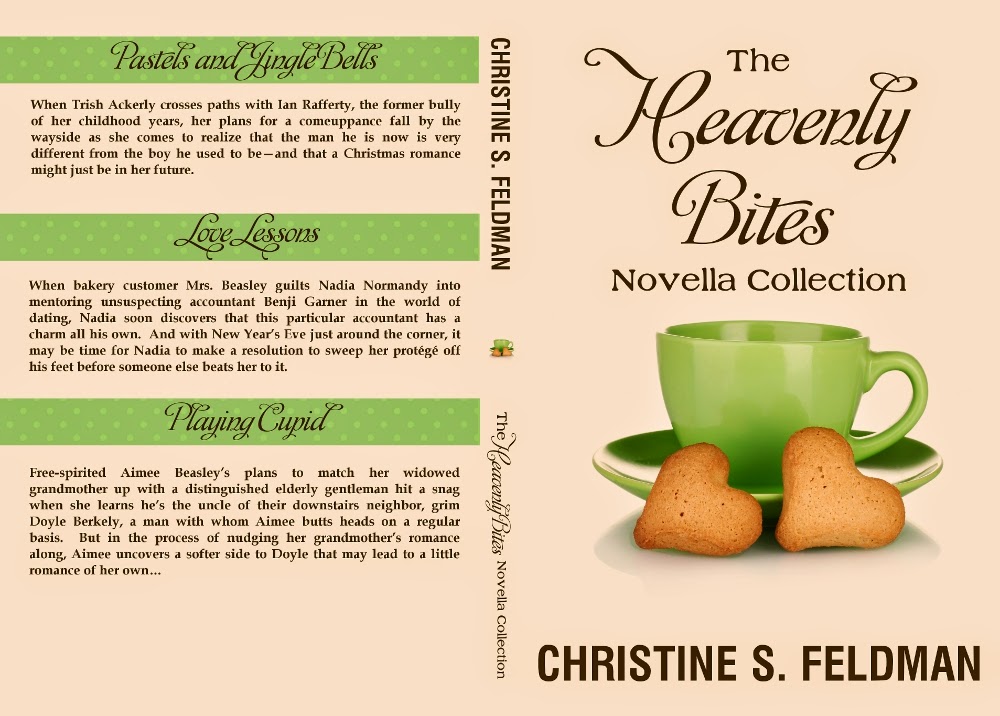 At the Heavenly Bites Bakery, three very different women bake up delectable treats and find romance with some unexpected but equally delectable men.  Find out how in these three short and sweet novellas, finally available as a collection and in paperback form…

Pastels and Jingle Bells:  When Trish Ackerly crosses paths with Ian Rafferty, the former bully of her childhood years, her plans for a comeuppance fall by the wayside as she comes to realize that the man he is now is very different from the boy he used to be—and that a Christmas romance might just be in her future.

Love Lessons:  When bakery customer Mrs. Beasley guilts Nadia Normandy into mentoring unsuspecting accountant Benji Garner in the world of dating, Nadia soon discovers that this particular accountant has a charm all his own.  And with New Year’s Eve just around the corner, it may be time for Nadia to make a resolution to sweep her protégé off his feet before someone else beats her to it.

Playing Cupid:  Free-spirited Aimee Beasley’s plans to match her widowed grandmother up with a distinguished elderly gentleman hit a snag when she learns he’s the uncle of their downstairs neighbor, grim Doyle Berkely, a man with whom Aimee butts heads on a regular basis.  But in the process of nudging her grandmother’s romance along, Aimee uncovers a softer side to Doyle that may lead to a little romance of her own…

It's so exciting to see these three novellas all put together in one place.  Marked down to .99 cents from May 26th-June 2nd, this is a bargain deal.  I loved these clean romance books and had such a fun time reading them and reviewing them.  Now is the time to snatch them up!

Enjoy the following excerpt from the opening of the first novella, Pastels and Jingle Bells.

It was probably inviting the worst kind of karma to be contemplating murder during the holiday season of all times, but that didn’t faze Trish Ackerly in the slightest as she stared through her bakery’s storefront window in shock.
It was him.  Ian Rafferty, bane of her junior high school existence.  She’d know that face anywhere, despite the changes in it.  Sure, he was a couple of feet taller now and certainly broader shouldered, but as he glanced away from the winter scene she had painted on the window only yesterday and at a passing car that whizzed by much too fast on the busy city street, the profile he presented to her confirmed it.  Yes, it was him.  That same nose, the odd little scar above his eye, the familiar way he quirked his lips…
Her eyes narrowed.  Ian Rafferty.  That miserable, mean-spirited little—


Then he turned his face back to the window, and Trish gasped and dropped to the floor before he could spot her staring at him.