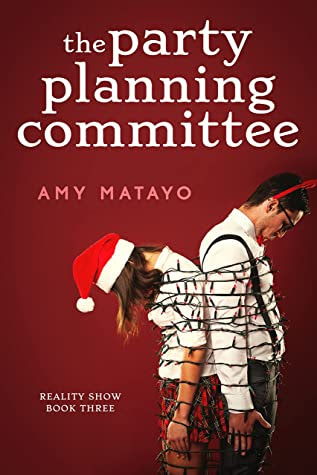 When Charlotte Pringle Frost won The Party Planning Committee three years ago, she gained name-recognition, money, and enough wealthy clients to keep her Beverly Hills party-planning business running for months. But when her father used all her winnings to pay off his gambling debts, he left her with nothing but the clothes on her back and a damaged reputation. Now she’s living in Arkansas, was just fired from her party store cashier job, and can’t figure out how it all went wrong.

Lance Dutton hasn’t been at his mental wellness retreat in Switzerland five minutes when his mom calls to tell him his little sister is engaged. Alexandria is twenty-two, and her overly tattooed fiancé fronts an underground boy band; so much for mental wellness. It isn’t enough that Lance has spent ten years of his life starring on Dealing with the Duttons—his family’s reality show; now he’s expected to come home and oversee the wedding. With multiple product lines and new endorsement deals in the works, his family can’t afford any bad press.

When Alexandria impulsively hires some random contestant she remembers from an old reality game show to plan the wedding, all Lance sees is a disaster in the making. It’s bad enough that the wedding is in four weeks and his sister wants the whole process aired live, but this Charlotte chick is cuter than he expected, and she’s messing with his head. Suddenly he’s thinking about the future, and nothing could possibly be worse than that.

Nothing, that is, until Alexandria tells them her ridiculous wedding theme.

As the only sane people around, it’s up to Lance and Charlotte to make this disastrous wedding a success, a nearly impossible feat that soon has them both wondering…

Even if the wedding doesn’t work out, could they?

Are you ready for the most over the top wedding ever thought up?  You won't believe the craziness of this because who in their right mind would ever even dream up this kind of stuff?  And somewhere in the middle of the crazy is one girl, desperately trying to make her dreams come true and one boy watching her like she is HIS dream come true.

Charlotte is a character that is easy to love and easy to root for.  She is talented and she works so hard.  I loved her pluck and her determination.  I also loved that her best friend was in her eighties.  Charlotte is a kind heart and there at the end, with the wedding preparations, I knew I loved her.  And guess what?  So did Lance!!

Lance is a fun character.  He brings the lightness to the story as he watches Charlotte with growing attraction and interest and goes crazy with his sister and her waaaaaaaay over the top ideas.  He made me smile.

Yes, this a reality show theme, but honestly, the reality show part of it seemed pretty background in comparison to other reality show books I've read.  It suited this story well.  There were a few things regarding Charlotte's family and her anxiety about them finding out about her that remained unresolved and left me wondering.  I wish that would have been addressed in the epilogue or something because it seemed to be a huge focal point for Charlotte in the beginning of the book for no reason.

Overall, I really like this book.  The author is one of my favorites and I love reading her books.  This one was entertaining and endearing.  I read through it quickly and was anxious to get back to it every time I had to put it down.

Posted by Getting Your Read On at 7:57 AM