A World without You (Terms of Inheritance, #3) by Dana LeCheminant 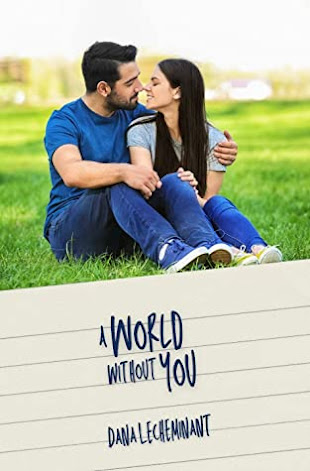 With a video channel that gets millions of views, Sara Hawthorne is the authority on convincing women around the world to live their best lives. If only she was practicing what she preached… She’s never felt a part of her perfect family, and the only person who truly knows her is her best friend, Rohan, who’s in love with her.

And she doesn’t feel the same way.

After her mom kicks her out of the house with an impossible task to earn her inheritance, Sara takes a job in the family hotel and crashes on Rohan's couch until she can find her own place. The more time she spends with him, though, the more Sara starts to question how she feels about Rohan, and she's hit with heartbreak when he starts dating someone who totally deserves him.

Trapped between her love for him and her desire to see him happy in his new relationship, Sara does everything she can to hide her feelings. But doing so risks the only friendship she's ever known, and letting Rohan live his best life might mean she has to live in a world without him.

Yesterday was release day for book three in this Terms of Inheritance series!  I would highly recommend reading this series in order but I wouldn't say you HAVE to.  It will just make more sense and provide more of a background for the characters.  Especially since I came to LOVE Rohan in the previous books.  I was so excited to see a story with him in the very center of things.

I wasn't sure how the author was going to get me to like Sara though.  She sure doesn't make a great case for herself in the previous books and I have a really hard time liking people I think are mean.  Sara is pretty self absorbed and honestly throughout the whole time she has known Rohan (since childhood), she has always been a bit mean to him.  It was good to be able to understand Sara better through flashbacks and memories and it helped me to like her more.  Luckily, Sara has many redeeming qualities and it was easy see her growth through the book.

Rohan is really amazing.  The world would be a better place if filled with people just like Rohan.  Generous, kind, forgiving, attentive.  Rohan has a good head on his shoulders.

I'm really enjoying this series.  We get a little glimpse of the next book at the end of this one and it looks like it's going to be interesting!  One family member left.

Labels: A World Without You, Dana LeCheminant, Sweet Romance, Terms of Inheritance Series