Come Back to Me (Waters of Time #1) by Jody Hedlund 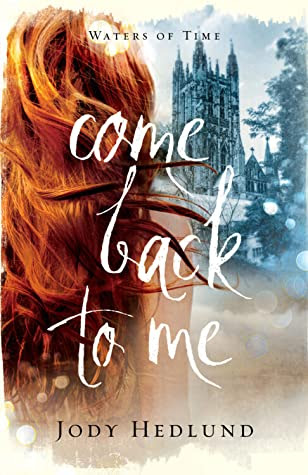 The ultimate cure that could heal any disease? Crazy.

That's exactly what research scientist Marian Creighton has always believed about her father's quest, even if it does stem from a desire to save her sister Ellen from the genetic disease that stole their mother from them. But when her father falls into a coma after drinking a vial of holy water believed to contain traces of residue from the Tree of Life, Marian must question all of her assumptions. He's left behind tantalizing clues that suggest he's crossed back in time. Insane. Until Marian tests his theories and finds herself in the Middle Ages during a dangerous peasant uprising.

William Durham, a valiant knight comes to Marian's rescue and offers her protection . . . as his wife. The longer Marian stays in the past, the more she cares about William. Can she ever find her father and make it back to the present to heal her sister? And when the time comes to leave, will she want to?

Bestselling author Jody Hedlund is your guide down the twisting waters of time to a volatile era of superstition, revolts, and chivalry in this suspenseful story.
* Amazon * Goodreads *
Time travel books are tricky, am I right?  Most of the time, you just can't think too hard or it just doesn't seem plausible but it's still fun.  This author definitely nailed the plausibility with a very in depth, detailed description of the why and how of it all.  Laying the foundation took pretty much half of the book.  We don't actually see the time travel until half way through and honestly?  I was growing impatient.  Sometimes it just felt too wordy and lengthy but I know, laying the foundation is important especially in stories like this and I actually thought the idea of the time travel was interesting.  I just really wanted more time with Will and Marian.  They are awesome together and I just didn't get enough of them.  I adored the second half of the book.  I didn't want to put it down.  Everyone should have a Will in their lives.  😍
I can see that the author set things up for future books and I'm excited to read them!  And hopefully Will and Marian will be in those too because that would make me happy.
The first half of the book gets 3.5 stars from me.  The second half, 5.
Content:  peril, mild violence, kissing (some thoughts about a husband wanting his wife physically, but nothing descriptive)
- I received a complimentary copy of this book.  All opinions expressed are my own.
Posted by Getting Your Read On at 10:58 AM

Labels: Come Back To Me, Jody Hedlund, time travel, Waters of Time Series