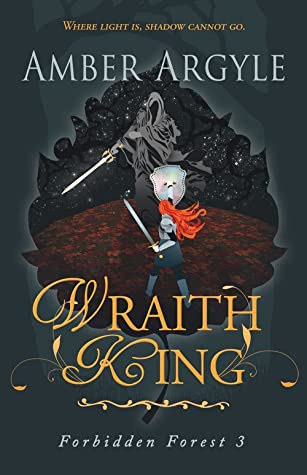 An assassin has set his sights on killing Larkin and ending her new reign as queen. Worse, the magic is dying. The magic that protects mankind from the wraith. The same magic Larkin has used to keep the curse from destroying the man she loves.

Because once that curse reaches Denan's eyes, he will be worse than dead.

But there is one hope left. There is a darkness growing inside Larkin. And with that darkness comes power. Perhaps even enough power to defeat the wraith.

But in embracing that darkness, Larkin risks becoming the very thing that hunts her.

Book three!  The final installment!  This has been such an interesting series, unique to me in it's plot and setting.  I really like changing up what I'm reading to keep things fresh and books by this author always do that for me.  I'm not normally a fantasy reader but I make an exception for this author.

This book was long.  And not very happy.  There were a lot of bad things happening with lots of different characters as the story marched toward that very climactic ending.  I think I had a harder time with the violence and struggle because of where I am personally in this crazy year.  I find myself longing for happy escapes instead of turmoil and fighting.  Because of this and by no fault of the author, I had a harder time reading this book.

I did love how the author surprised me with things in this book.  It didn't go where I thought it might go originally and I like when that happens.  I also really enjoyed Larkin's personal development from the beginning of this series to the end.  I also loved the relationship between Larkin and Denan. 💙

This series is one you must read in order.  There is no way you will have a handle on all the characters and the plot if you don't.

Content:  high violence (descriptive), killing, death.  Innuendo and intimate relations between a married couple with no real descriptions, but you know it happens.

Posted by Getting Your Read On at 9:43 AM