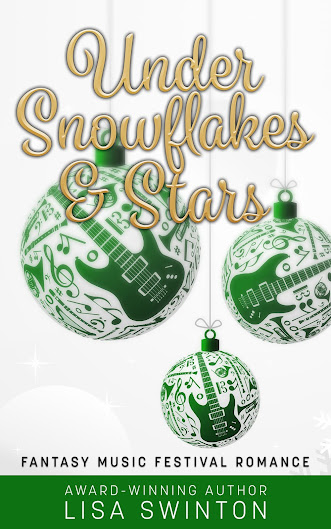 Her hula hips have him spinning. His cowboy skills will keep her alive. When a blizzard strands them together, sparks fly under snowflakes and stars at the Fantasy Music Festival.When Noelani sees snow for the first time, she’s amazed by it’s beauty, but unprepared for the cold. She plans to spend her downtime at the Fantasy Music Festival curled up by a fire under a blanket with a perpetual mug of hot cocoa.

Cache hasn’t had a girlfriend in a decade, but the sun-kissed Noelani has him rethinking his flirty ways and craving something deeper. He invites her on a snowmobiling adventure, hoping she’ll love the serenity of winter. Having her arms around him is a bonus.

They both get more than they bargained for when a blizzard blows in, stranding them. Cuddling goes from pleasure to necessity in a heartbeat.

When the crisis ends, can they make a future together or have they only been under a yuletide spell?

This was the cutest little story!  I loved the flirtations and the good dialogue between Noelani and Cache.  I also loved how different they were but how those differences were attractive and interesting to each other.  There's nothing like being stranded together in a potentially dangerous situation to bring you closer together faster.

I read through this story in less than an hour.  It's short and sweet!

This title is just $.99 right now and is also on KU if you have that.