The Gentleman and the Thief (The Dread Penny Society #2) by Sarah M. Eden 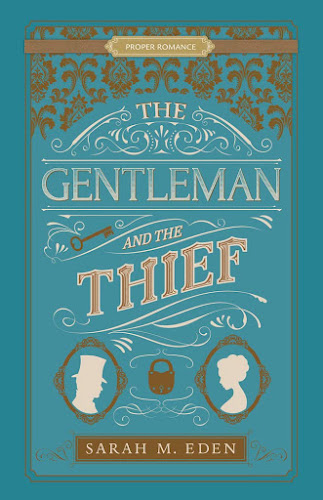 A standalone novel in The Dread Penny Society set in 1865 London brimming with secrets, scandal, suspense, and romance.

From the moment Hollis Darby meets Ana Newport, he's smitten. Even though he's from a wealthy, established family and she isn't, he wishes he could have a life with her by his side. But Hollis has a secret: the deep coffers that have kept his family afloat for generations are bare, so he supports himself by writing penny dreadfuls under a pseudonym. If not for the income from his novels, he would be broke.

Ana Newport also has a secret. Though she once had a place in society thanks to her father's successful business, bankruptcy and scandal reduced his fortune to nothing more than a crumbling town house. So Ana teaches music during the day, and at night she assumes the identity of the "Phantom Fox." She breaks into the homes of the wealthy to reclaim trinkets and treasures she feels were unjustly stolen from her family when they were struggling.

When Hollis's brother needs to hire a music tutor for his daughter, Hollis recommends Ana, giving him a chance to spend time with her. Ana needs the income and is eager for the opportunity to get to know the enigmatic gentleman. What neither of them expects is how difficult it will be to keep their respective secrets from each other.

When a spree of robberies rocks the city, Ana and Hollis join forces to solve the crimes, discovering that working together deepens the affection between them. After all, who better to save the day than a gentleman and a thief?
* Amazon * Goodreads * Deseret Book *
The Dread Penny Society is such a fun basis for this series and these books.  I am loving the whole premise of a group of people who secretly meet and spread help to those who need it most as they try to rid the city of the most vile.  They are quite a mash up of personalities but it takes all kinds of people with all kinds of knowledge and talents to make an organization like this work.  While I think this book can easily stand on it's own, I would recommend reading them in order because all the characters interconnect and you get to see them in each book.
Hollis is such a gentleman.  He is perceptive and kind.  Because of his upbringing, he is able to bridge the gap to polite society where some of the others cannot which definitely provides useful in this book!  I loved how sweetly Hollis viewed Ana and how gentle he was with her all throughout the book.
There is a bit of mystery in this story and a bit of suspense although it is light.  The gentle build in the story felt good and really allowed me to love the characters along the way.  Sarah Eden is fantastic at crafting characters that are wonderfully relatable and easy to love.
Content:  mild peril, kissing
- I received a complimentary copy of this book.  All opinions expressed are my own.

Sarah M. Eden is a USA Today best-selling author of historical romances. Her previous Proper Romance novel Longing for Home won the Foreword Reviews 2013 IndieFab Book of the Year award for romance. Hope Springs won the 2014 Whitney Award for “Best Novel of the Year,” and Ashes on the Moor was a Foreword Reviews 2018 Book of the Year silver medalist for romance.
Combining her obsession with history and an affinity for tender love stories, Sarah loves crafting witty characters and heartfelt romances. She happily spends hours perusing the reference shelves of her local library and dreams of one day traveling to all the places she reads about. Sarah is represented by Pam Pho at D4EO Literary Agency. 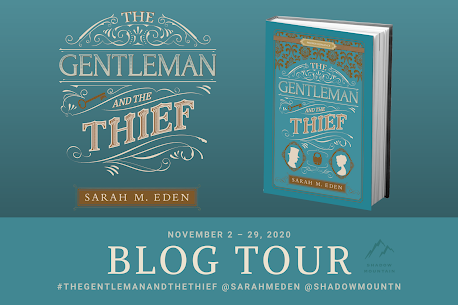