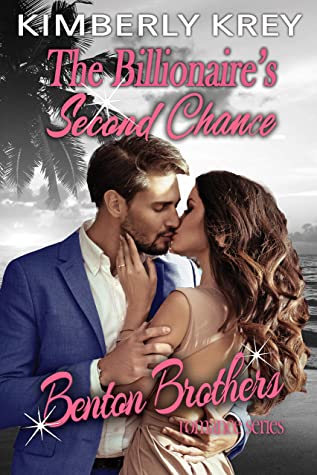 Billionaire Duke Benton, the last bachelor standing among the Benton Brothers, has a second chance at romance with a woman from his past. The one woman he regrets letting go of. But can he keep her in his grip this time?
* Amazon * Goodreads *
It's a new book by Kimberly Krey!!  And guess what?  It's a good one!  Second chance stories are so fun.
These Benton brothers are something else.  After the last book where Duke's twin brother poses as him and ends up getting the girl, I knew Duke's story would be a good one.  Vivi is the one that got away and Duke has always regretted it.  As he should because Viv is smart, compassionate and beautiful.  She also has more to protect now than she did ten years ago so Duke has his work cut out for him.
I genuinely liked these characters so it was easy to fall into their story.  As per usual, Kimberly Krey delivers some yummy kissing and some zingy attraction.  Plus, Costa Rica!  I really want to go there.
Even though this is book four in this series, each book can easily stand alone.  You will probably be happier if you read these books in order as this family of characters show up in each book.  This series is on KU if you have that.
Content:  kissing
Posted by Getting Your Read On at 10:01 AM