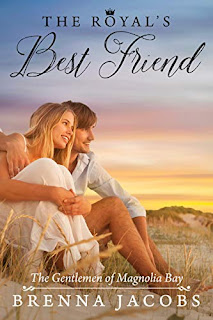 When best friends fake a relationship, will it lead to real love?

When disaster strikes for Will Maxwell’s best friend, Peyton, he leaves his glamorous life in London to help her save her family’s home in a sleepy South Carolina beach town.

Peyton Shellhouse can’t believe it when Will Maxwell appears on her doorstep, determined to rescue her after a hurricane wrecks her little island. But when his toxic ex-girlfriend crashes the scene, suddenly Will needs Peyton to save him once again from the clutches of the scheming Bianca. Reluctantly, Peyton agrees to his desperate plan: fake a relationship with each other to convince his ex he’s taken for good.

When Will’s fake romance with Peyton leads to real feelings, he must choose between his privileged life as the son of an earl or a chance at a new life with her. Peyton thinks it’s his itch for adventure doing the talking, and she refuses to risk their friendship over a few shockingly hot kisses. Can Will convince her that his old life is worth the sacrifice for this new love?

I'm excited about this new series by author Brenna Jacobs!  This book is set right on the coast of South Carolina which is definitely where I wish I could be right now, minus the hurricane.

Will and Peyton are the best of friends.  They have a lot of history behind them and a firm foundation underneath them.  I could feel the level of comfort that existed between them.  I really enjoyed their gradual awareness of each other in new ways- Peyton can glam up and hobnob with the elite and Will can swing a hammer and use a saw.  Those new discoveries, along with some zingy kissing lead to that shift in thinking that brings Will and Peyton to deeper feelings of attraction and love.  It's a fun ride.  My favorite moments were Peyton standing up to Will's ex girlfriend and Will's grand surprise.

This series is going to continue with Will's friends!  I'm excited about this because we get a glimpse of them in this book and I can tell it's going to be fun.  Hopefully we'll see Will and Peyton around in the next books too.