The Enemy Between Us by Melinda Sue Sanchez 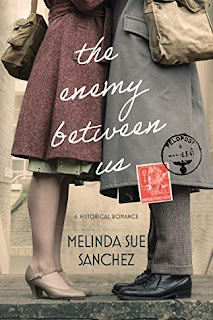 As war tears her country apart, Franca Chessari's sole focus is on supporting her family amid Nazi occupation. But when her parents, both high-ranking partisans, go missing, Franca is compelled to take action---even if it means crossing enemy lines to save those she loves.

Peter Weimer is a German soldier forced into a war he abhors. When he can take no more of the Nazi atrocities he’s been forced to witness, he deserts the German army—a decision that brands him as an enemy.

Franca and Peter were nothing more than two strangers from enemy countries, but when their paths collide amid the horrors of war, they are swept into an epic journey of chilling danger, unparalleled courage, and a sweeping passion that could cost them everything they have fought for.
* Amazon * Goodreads * Deseret Book *
This book demonstrates perfectly why I love historical fiction.  I've read a lot of WWII books set in many various places, typically England and Germany, but not so many set in Italy.  I loved the dual first person perspectives from Franca and Peter which really helped me see and feel their inner struggles and desires.
I thought there was an excellent balance of charged moments of danger and still, more mundane moments where the characters could just be.  It allowed the story to flow at a good pace and still gave me time to digest and relate to the characters.  The happy, gentle moments stood out strongly against the many hardships of living in the midst of the war.  These characters faced more difficulties than they did happy moments but the author did a great job of weaving hope into the characters and the story so that I never felt too overwhelmed.
Peter and Franca are both fantastic characters.  Strong, even though they both feel weak in their own ways.  Courageous, even when they are both afraid.  Determined.  Good.  They both have heart and it really shined through.  I could have kept reading more about these two and been perfectly content.  I haven't read a historical fiction book in a couple months so this was a fun dive back into a genre I love.
Content:  peril, war time violence, kissing
- I received a complimentary copy of this book.  All opinions expressed are my own.
Posted by Getting Your Read On at 1:43 PM