The Marquess Meets His Match by Julie Coulter Bellon + Giveaway! 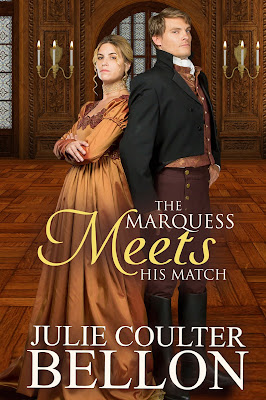 A traitor with a deadly plan. Two agents sent to expose his identity before he strikes. But danger is closer than they think . . .
Lord Christian Wolverton―known as Wolf in a covert group operating during the war against Napoleon―has been called home from his military duties. For the moment, his family responsibilities require him to suspend his more clandestine activities. But information falls into his hands that a traitor will soon try to tip the scales back into French favor and Christian doesn't have much time to stop it from happening.

Going to the one person who can help him, the powerful Duke of Huntingdon, Christian comes face to face with Lady Alice. She's a beautiful member of the ton with a very big secret―she's also a trained agent and already on the case. Forced to partner with her to lure the traitor out of hiding, Christian wants to quickly close the case himself, before Lady Alice is more closely involved. But Lady Alice has ideas of her own and she's going to prove her theories correct―with or without him.

Danger is closer than they think, however, and it's a race against time to expose the traitor's identity before British lives are endangered. Both Christian and Alice have strong opinions on who he is, but which one will be proven right and can they catch him before it's too late?

What a fun romp this book is!  There is mystery, intrigue, danger and yes, a growing romance.  Lady Alice is fantastic- a trained secret agent with plenty of moxie.  She is strong, brave and smart but also very feminine and classy.  She felt like the perfect heroine to me.  I love how she stands her ground with Lord Wolverton and how much he grows to respect and enjoy that.  ;)

The story was entertaining, the plot moved at a great pace and I thoroughly enjoyed every moment of it.

- I picked this book up on Kindle Unlimited. 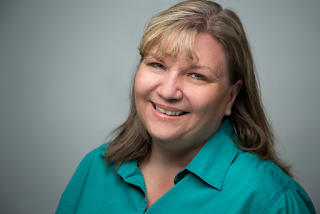 Julie loves to travel and her favorite cities she's visited so far are probably Athens, Paris, Ottawa, and London. In her free time she loves to read, write, teach, watch HawaiiFive-O, and eat Canadian chocolate. Not necessarily in that order.
If you'd like to be the first to hear about Julie's new projects and receive a free book, you can sign up to be part of her VIP Readers Group at juliebellon.com
a Rafflecopter giveaway
Posted by Getting Your Read On at 7:32 AM