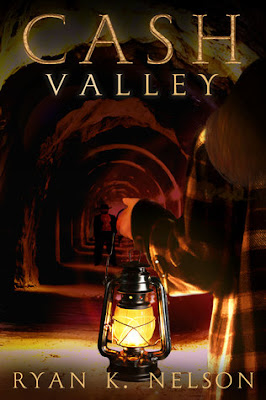 When FBI Agent Alex Travis receives an anonymous phone call on a September morning in 1954 with a tip concerning the now cold case of the Cache County Bank robbery, it has his undivided attention. The tip leads Travis to the top of the secluded Green canyon in Logan, Utah, where a young man named Jack Pepper proceeds to tell a story spanning the two years from the time of the robbery, when he and his girlfriend, Kate Austin, stumbled upon the crime of the century for the Cache valley. Travis must decide if he is dealing with the suspects or the victims of one of the largest bank robberies in U.S. history.

To get the answers, it will take one more trip up the canyon, to the entrance of the Spring Hollow mine, where the daylight ends and the cold dark begins.

The way this mystery unfolded was not quite like any mystery I've read before.  It was, for the most part, interesting but sometimes I felt like the story was dragging a bit.  The pacing is slow up until the end and yet, I was curious the whole way through.  How would things end?  What was going to happen?

This book is plot driven for sure.  I don't know that I had a lot of emotional or personal connections to the characters, but I liked them well enough.  I was definitely interested in the story which is mostly told in a series of flashbacks and verbal memories from one character to another which is what made it so different, I guess.  It's not heart pounding or dynamic but there is definitely something there that kept me reading to the end.  It felt like a story that might be told around a campfire late at night.

I think I would describe this book as a gentle mystery with a western feel to it.  If you love mysteries, you should give this book a look.  It's also on Kindle Unlimited!

- I received a complimentary copy of this book.  All opinions expressed are my own.
Posted by Getting Your Read On at 10:44 AM